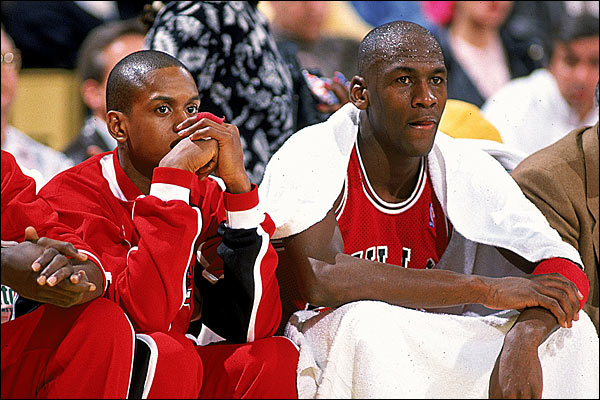 LeBron James made waves this week with a quote about chasing Michael Jordan’s ghost, but MJ’s former teammate B.J. Armstrong warns that it’s a fruitless chase.

Armstrong says LeBron should be looking to make his own, indelible mark on the game instead of worrying about stacking himself up against Jordan’s legacy.

Armstrong played with Jordan in Chicago, winning three titles for the Bulls in six seasons.

Armstrong, now a player agent who represents Derrick Rose, has some advice for James. […] “Chasing a ghost is in make-believe land,” Armstrong said in a telephone conversation. “That’s far-out, that’s unattainable, that’s something you can’t achieve. This ain’t no ghost. If you want to do it, there’s a blueprint. It’s possible. There’s only one way to get there. It’s not possible for him to do what Jordan did because the circumstances are different, everything is different. What is possible for him is to be bigger than every situation that’s put in front of him, to dominate every situation that’s in front of him.”

“This is to LeBron James: If you want to be the best, get rid of the comparisons,” Armstrong said. “Get rid of all the comparisons that are out there. That’s what Michael Jordan did. Jordan realized that in order to be the best, you had to get rid of all the comparisons. […] When you compared Jordan to somebody else, it made him more and more upset. That was with guys who played before him, guys he was playing against and guys in the future. He got upset every time [the media] got on TV and started comparing him to other people. When you compared who is the best 2-guard — Jerry West or Michael Jordan — he was upset. When you talked about who was the best player in the NBA, he was upset. When you talked about who had the most championships, he was upset.

“I remember vividly him getting upset. He’s mad right now that somebody’s even thinking a guy can get to his level. Jordan tackled them all — Wilt [Chamberlain], everyone. Everyone from 1946 on, he went after them until there was no one left to compare him to. So my challenge to LeBron is: This ghost has a face to him. So get rid of all the comparisons because Jordan, unequivocally, did not want you to compare him to anyone.”