Babylinks: Refs and the Slippery Slope 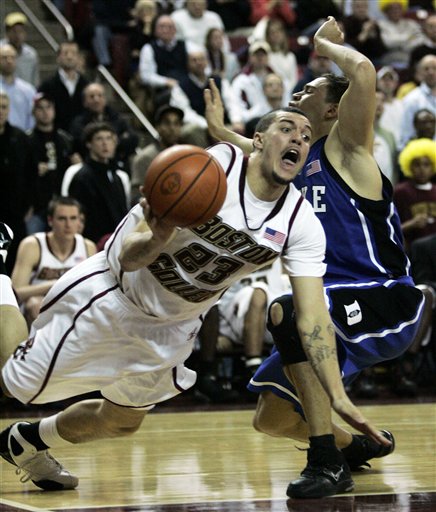 In that disgusting weather that plagued the Northeast today and made my Valentine’s Day walk to Dunkin’ Donuts like a scene out of a bad Jerry Bruckheimer movie, I slipped. Like an elderly person without a cane, I fell right on my ass. I tried to brush it off with one of those cool, prop-myself-back-up, brush-myself-off-and-pretend-like-nothing-happened maneuvers, but everyone clearly noticed and an old woman with a dog laughed at me as I was getting up.
I did not call the highway department and scream at them about sidewalk management. I did not rent a backhoe, return to the site of the fall and dig a hole so deep that, even though people might plummet to their death, but they’re sure as hell not gonna slip on that ice again. Had I gotten up and started pummeling that old woman with the dog, she would not be rewarded in the media (or at her funeral) for her restraint.
So why, then, when I’m watching this BC-Duke matchup (from the comfort of my own home, thank God — I’m not venturing to Chestnut Hill in nuclear winter, guys. Maybe Saturday vs. UNC) are these officials forever lauded for doing what is just expected.

In the first couple of minutes of the second half, a reeling Jared Dudley drove to the hoop to get to the line and earn some points the hard way. On a fifty-fifty block/charge call, the umpteenth one that went in favor of Duke last night, Dudley thought he’d drawn a block on Jon Scheyer after an offensive rebound of a missed Tyrese Rice free throw. Instead, a charge and Dudley’s third foul with 17 minutes left in the game. He screamed, shot up immediately and accidentally nudged official Sean Hull.
Brad Nessler then decided that this was the ideal time to commend the entire officiating crew for acting, you know, normally.

“What a brilliant piece of officiating!” he screams during the replay. He says it again after a commercial break, too, for effect.

He’d be onto something, too. That would be great officiating had the game not been called so inconsistently at the end of the first half that made the pace look as if BC and Duke were playing on one of the outdoor courts in the four inches of slush.

But even if Hull did happen to show some Gandhi-esque leniency in the waning minutes of this game, isn’t it his job to just let it go? Has it really gotten so bad that referees are given purple hearts for not OJ Mayoing it?

In the end, technical or not, it wouldn’t have mattered. Duke was a considerably better team tonight in a 78-70 win that was much more of a blowout than it sounded.

But, just as the Blue Devils are finding out this season, you shouldn’t get any extra for just showing up and being pedestrian. They don’t get points for restraint. Neither should officials.

– I’m interested to see what the above does to the comments? Do we bag on refs? Does this turn into a Mark Cuban discussion? Do we talk about how I became a softie for Duke? Or can we please just make fun of the Gonzaga basketball team a little bit more?
– My sleeper apparently went into a coma last night when Marquette fell to a dumbfoundingly mediocre Depaul team, 72-67. Way to take care of business in the Big Least section of the division, boys.

– Anyone who didn’t guess my sleeper last time, you can find it here and they’re still moving strong. A couple guessed Texas, which was a good shot in the dark, but I loathe young teams come tourney time. Young stars should be a death knell, but Durant defies all logic to me.

– Then again, the other prodigy almost pulled a Marquette last night.
– From the man who brings you the best Tim Hardaway coverage on the Internet, Marcel Mutoni, we’ve got a good wrapup of this year’s giant killer: Virginia Tech.

– Oh, in terms of Tim Hardaway, I’m sure he didn’t mean it. I go on twenty-minute hate rants all the time that I don’t mean at all. Makes plenty of sense to me. I’m sure he sits around and watches Queer Eye all the time in between CBA games, or whatever washup league he plays in nowadays.