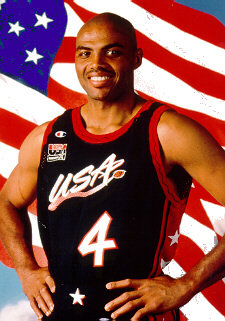 It’s rare that we get to talk about politics over here, but as you may have heard, Charles Barkley is back at it on the campaign trail. I would like to attack this piece of news Fire Joe Morgan style – which is to say – examining every last quote.

That would help to explain the tremendous gambling losses.

“I really want to help people improve their lives, and what’s left is for me to decide how best to do that.”

Hmmmm… by getting into politics, where other people that entered the dirtiest of games as celebrity jocks with no prior political experience include Arnold Schwarzenneger, Steve Largent, and Jesse Ventura. Okay, I’ll give you Jim Bunning and Jack Kemp too. I love seeing athletes and entertainers branching out as much as the next guy, but this is not Randy Moss running a Jamba Juice. Charles is more like that other loveable receiver, T.O., who just the other day used the old Barkley classic “I was misquoted in my autobiography.” Also, on Inside the NBA, Charles seems to be more concerned with getting home early and whining about being forced to watch boring NBA games than anything else. But hey, I’m sure he’d do a great job with the demanding schedule of a head of state.

“I was a Republican until they lost their minds,”

So you supported the party that kept your taxes down for years, and now that they are getting hammered in the polls, you’re switching sides. Actually, by flip-flopping Charles is behaving like a true politician.

“I say welcome Charles Barkley. Charles Barkley has been a Horatio Alger story for many people, not only in sports but in business and broadcasting,” – Joe Turnham, Alabama’s Democratic Party chairman

Okay Mr. Turnham. You made me look up who Horatio Alger is. He wrote inspirational tales of people overcoming adversity to realize their dreams. Charles overcame poverty and his gift of unique basketball skills for his body type to secure a college scholarship and a Hall of Fame NBA career. I believe the message that Charles Barkley can teach the youth is that if you are phenomenaly talented and you work hard but not too hard – because you still want to have fun and be jolly and fat and be able to throw a guy through a window or two if you feel like it – then there is nothing you can’t achieve.

“He doesn’t have any of the bases necessary to run a statewide campaign,” – Political Science professor Jim Seroka.

Hey Jim, stop hating. Charles is funny! People like to be around him and he makes them laugh. Why are you making this all serious? It’s not like he’s running for President. And you think he doesn’t have bases? The guy is on national TV all the time. This is just Alabama.

“To be governor requires more than a publicity stunt. It requires real leadership,” – head of the state GOP Twinkle Andress Cavanaugh

Charles, Charles, Charles. Someone as rich as you can do so much more as a private citizen than you can by stepping into the world of politics. I suggest finding a candidate that you believe in and supporting him or her publicly and financially, and continue to do your “Charles being Charles” thing where you speak your mind. If you were to get caught up in the daily grind of leading a state, then the fun loving Round Mound would disappear. Look at what’s happened to Arnold. As for helping the poor, you can always do that when you have lots of disposable income. Again, the excessive gambling has got to go if this is serious.