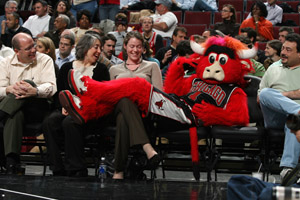 Everyone’s buzzing about Benny the Bull’s dance performance at All-Star Saturday Night. Lang got a kick out of it in his liveblog. HoopsVibe ran a great photo of it in their All-Star Weekend recap. It was Tweeted to death.

How To Be A Mascot

By Benny The Bull, longest-tenured mascot in the NBA

As far as I can tell upon careful study of our family tree, I’m a sixth generation Benny. My family name has been in the NBA since the ’60s. In my years here, I’ve seen a lot of crazy stuff.

My interaction with fans is a great opportunity for them to have tangible interaction with the Bulls brand. Dunking is always a popular element with fans—it’s just a bizarre thing to see a furry animal flying through the air doing tricks with a ball. Half the time I think the fans are secretly hoping to see me get stuck in the basket or land in the front row. Dunking ability is expected by most teams, but as with everything there are exceptions to the rule. For example, my friend Clutch the Bear in Houston is a rather portly fellow, which does not really lend itself to “high-flying dunks.” One thing that obviously makes a big difference in how the job goes is how your team is playing. Imagine telling knock-knock jokes to someone who just had their car stolen. That’s kind of how it is when I’m trying to inspire excitement or laughter when we’re on a five-game losing streak. Those are the times when you really have to not patronize the crowd and expect them to jump up and down like they just won the lottery. All you can do is be positive and find other avenues to keep the fans from focusing on the negative. That’s usually when it’s a good time to pull a cute little kid out of the crowd and make him the star of the show. I mean, how are you going to scowl and brood at a 7-year-old doing the worm?