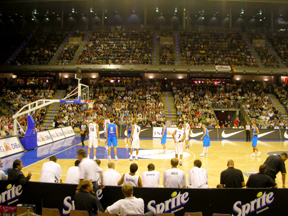 With the World Championships just days away, all the national teams are trying to get into game shape. In Berlin, four teams — Italy, France, Turkey and Germany — gathered to get in a good run. Linkstigator Nadav Mor was in the house…

The two day tournament got little to no hype in the German press, which is weird because it was to be Dirk Nowitzki’s first time playing in the German capital, ever. Furthermore, the four teams featured several NBA and Euroleague stars. Italy’s Andrea Bargnani was not there, but Barcelona’s star point god Gianluca Basile was around, and he’s pretty damn good. I’m sure the Raptors will pick him up soon enough.

France has the most players NBA players, with Lang’s man Tony Parker being the main attraction, followed by Boris Diaw, Ronny Turiaf, Mickael Pietrus and Johan Petro. I was distraught to find Fredrick “Crazy Legs” Weis not only on the French roster, but in the starting five. More on him later. We call him crazy legs cause on the infamous Vince Carter dunk, of course, cause Vince got his legs about Weis’ head, and that was crazy. AND because of “Don’t be a Menace…”

Anyway, the first game of the tournament was a World Cup Final rematch between Italy and France. The Azzuri came out gunning, while TP seemed tired, which he probably was, as he flew in from Greece the day before and headed over to Niketown for an autogrpah session.

The first half was pretty even, but the Italians put the game away in the third, outscoring the French 25-14 and holding on a surprising 13 point win. TP, was, um, playing pretty bad. I mean, it was obvious that he was the best player on the court, but his head wasn’t in the game, though he ended up being the leading scorer with 14 points. One thing I noticied is that kept looking over to the stands for some reason. Using commen sense, I did the same, hoping to spot Ms. Longoria. I didn’t.

One thing about Ronny Turiaf, whom I met a last month at the World Cup final. I think you mentioned this Lang, back when you saw the Lakers play in LA. Having undergone heart surgery about 2 years ago, Turiaf plays with a type of bandage or protective device under his jersey. When you see him play, you don’t realize he had open-heart surgery, but still, I felt a little uncomfortable seeing him jump and run around the court. I caught up with him after the game and asked how his health was, and he said everything was good and that he’s working hard. So thats bon.

The second game featured home team Germany against Turkey. I was dissapointed to see that Hedo wasn’t around, but more dissappointed at Dirk’s play. He looked pretty hapless, and like TP, pretty tired. Maybe playing 100+ games in the NBA this past season had something to do with it, I don’t know, but whatever, its Dirk, and the German fans still love him. The Germans cruised to a 14 point win. Though quiet, Dirk lead his team in scoring, with 12.

The second and last day featured the Final, between Italy and Germany. In true odd German fashion, the Final took place BEFORE the 3-4 place game, meaning the second game, between losers of France and Turkey was played before an underwhelming crowd of around 800 people.

Again, Italy came out shooting against a pretty noisey home crows, building a solid, double-digit lead going into the 4th. Dirk was yet again not really involved in the offense, more due to his teammates not finding him. He had several nice moves in the 4th, as the Germans pulled to within 3 points with less than 3 seconds. However, they were called for a 5 second violation on an inbounds play coming back from a time out. How bad is that? Anyway, the Italians put the game away, and celebrated yet another title on German soil.

In the following game, France lost to Turkey. TP again lead the French, but it was too little too late.

A few other notes:
— One difference between American and European basketball is the sponsors issue. Team USA doesnt play with sponsors on their jerseys, except for the Nike Swoosh. However, most European teams do. I mention this because Italy’s sponsor is Kinder, Europe’s biggest chocolate producer. That’s dope. Furthermore, their jerseys are made by Champion. That’s so 1995.

— It turns out Tony Parker’s best friend on the French team is Fredo Weis. They were hanging out, chilling and laughing, most of the time distant from the rest of the team. Yikes.

— Boris Diaw is shorter in real life than on TV. Plus, he’s real cool and signed many autographs and took pictures with a lot of kids.

— Turns out MJ is heading over here in October, to do some promo work for Jumpman. I love that the owner of an NBA team flies around the world to promote the shoes his players are wearing.

So that was that. It looks like Italy will be a force to be reckoned with come Japan, and I’m sure the US will have their hands full with them. Or not.