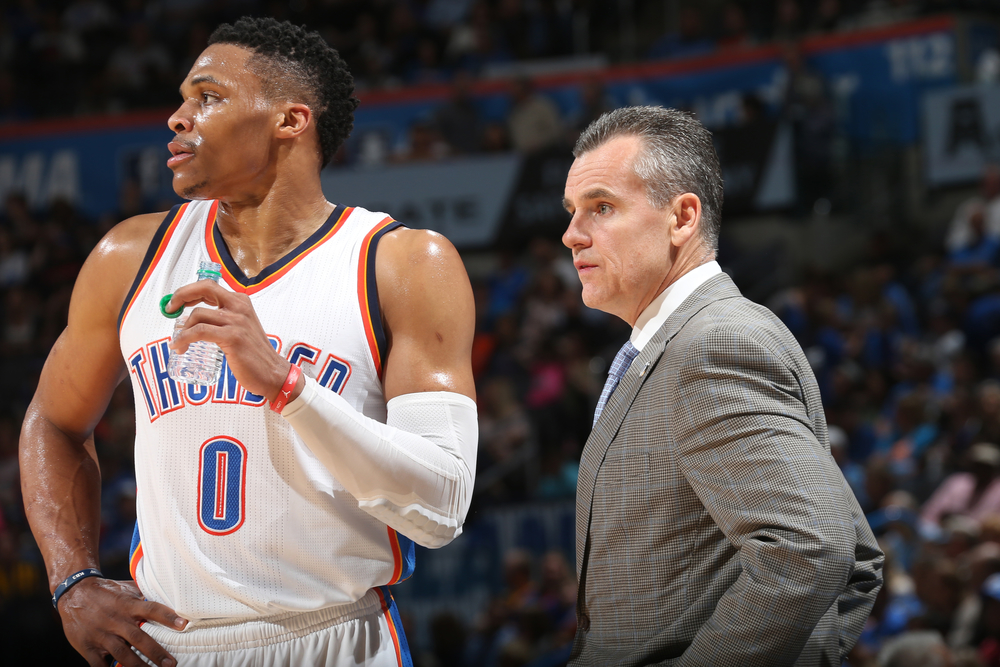 With the entire world expecting Russell Westbrook to go on a mind-boggling scoring binge next season, OKC Thunder head coach Billy Donovan is trying to manage expectations for his superstar guard.

Donovan claims that the Thunder offensive attack will not be all Westbrook, all of the time.

Per The Oklahoman (via Yahoo):

“I think if you go back two years ago when Serge (Ibaka) was out and Kevin missed those (55) games, and they’re on the cusp of making the playoffs, I think at that point in time when you set up a system and a style of play and everything is geared toward Kevin Durant and Serge and they’re such big priorities for you offensively, and now they’re not there, you’re not going to be able to just plug somebody in Kevin’s role or Serge’s role and they’re going to be able to just fill in that late in a season.”

Donovan’s thought is an offseason of planning will look a lot different than having to make up on-the-fly for the injuries that plagued the Thunder in 2014-15. While Ibaka and Durant are huge losses – a combined 33.3 percent of the offense from a season ago – their offseason exits give the Thunder more time to formulate a gameplan around Westbrook and his ability to create for the players around him. […] Arguably no one in the NBA did that better than Westbrook last season, who finished second in the league in assist percentage (he assisted on 49.6 of the Thunder’s field goals when in the game). Donovan said Westbrook understands that he’s “gotta make everyone else around him better.”

“I think for Russell, he tried to put the team on his back and say ‘OK, I’ve got to get us to the playoffs,” Donovan said. “I think because we’re starting out without those players available, we’ve got some time to evolve and develop a style of play and a system, and certainly he’s going to be the catalyst and the key to it.”