Billy Hunter: ‘Maybe We Can Start Our Own League’ 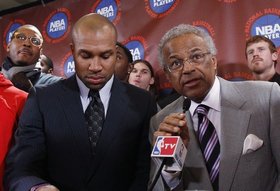 Billy Hunter (now the Executive Director of the NBA Players’ Trade Association, or something to that effect) and NFLPA head DeMaurice Smith spoke at a panel yesterday, and the author Touré captured some of the key talking points, and posted them on his Twitter page last night.

The big take-away was renewed talk of NBA players possibly starting their own league (word to Amar’e Stoudemire):

Billy Hunter: “Maybe we can start our own league. There are faculties where we can do that. Can’t play at MSG but can play at St John’s.” … There’s talk of getting a TV deal and creating a new league but it’d have to be with a network that’s unafraid to cross the NBA.

Billy Hunter: “The owners are scared of LeBron style movement and want to keep players wedded to franchises … The players’ decision to blow up the union [decertify] was unanimous. They were high-fiving, sayin let’s get it on!”

“The season is not yet on life support. There’s still time to put on an abbreviated season.”

According to Touré, Hunter also touched on how the NBA is failing to properly market itself in China (the world’s biggest hoops market) despite the League’s incredible growth, claimed that the NBA doesn’t have the “will” to reach a labor deal, and re-affirmed his opposition to a hard salary cap.

As for the talk of players creating their own, separate league, that’s all it is at the moment: just talk. Here’s to hoping a deal can be worked out with the NBA before this turns into its own interminable battle and debate.