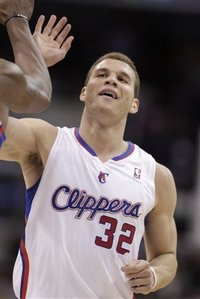 When it comes to the NBA’s major awards so far this season, the element of surprise has been sorely lacking. And the trend continues with the Rookie of the Year.

Blake Griffin, the Los Angeles Clippers’ absurdly spectacular forward, will accept the award today, an honor that was basically his to lose since he registered his first earth-shaking dunk this year.

The Clippers have a press conference set up to announce an award of some kind this afternoon, and there’s no doubt as to who will be the recepient of it.

Clippers power forward Blake Griffin will be named NBA rookie of the year, following in the footsteps of current stars LeBron James, Kevin Durant and Derrick Rose. The award will be announced Wednesday, according to a league official familiar with the voting who was not authorized to speak publicly.

Griffin is the fifth player in franchise history to win the rookie award. Terry Cummings won it in the 1982-83 season with the San Diego Clippers, and Adrian Dantley, Ernie DiGregorio and Bob McAdoo won it as Buffalo Braves before the franchise moved to California.

Griffin averaged 22.5 points and 12.1 rebounds a game this season and was named to the All-Star team. He also won the dunk contest on All-Star weekend.

I’m still kind of vaguely upset about how the Dunk Contest ended — really, jumping over the hood of a Kia? — but that’s the only complaint anyone could possibly have about Blake Griffin’s rookie season.

He was dominant, and has Clippers fans filled with hope going forward for the first time since, well, ever.