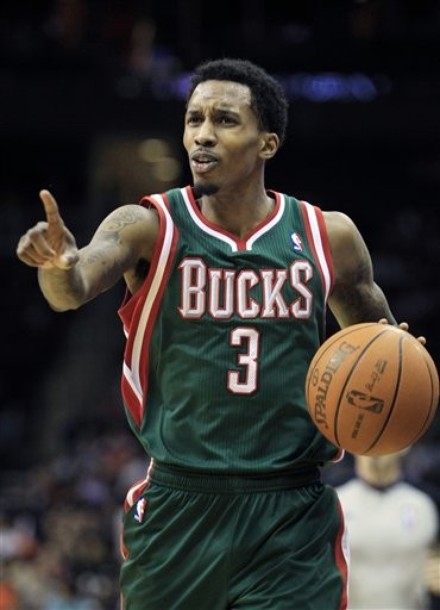 Entering his fourth NBA season and also the final year of his rookie contract, Milwaukee Bucks point guard Brandon Jennings knows the pressure to win is at a new, unforgiving level. After leading the Bucks to an improbable seven-game series against the Atlanta Hawks in his rookie season, Milwaukee has missed the Playoffs for two straight seasons, most recently posting a below-average 31-35 record during the lockout-shortened campaign. Jennings, like head coach Scott Skiles and general manager John Hammond, has not received a contract extension, and will be under the microscope this year. While aware of the situation, Jennings has high hopes for the Bucks, and wants to be a part of the organization for a long time—If it were up to him, he’d have a new deal signed and completed as soon as possible.

Bucks point guard Brandon Jennings is hoping to have a contract extension in his pocket by the time the regular season opens on Nov. 2 in Boston. “It would be something I’d love to get done with and over with so I don’t have to worry about it,” Jennings said of the contract extension. “But the main thing is just to come into training camp a better player, a better leader … just lead the team to the playoffs.” Bucks management and Jennings’ agent, Bill Duffy, have until Oct. 31 to reach a deal. Jennings knows there will be plenty of pressure to win this season, particularly with coach Scott Skiles and general manager John Hammond in the final year of contracts. And the Bucks are coming off a 31-35 finish during the lockout-shortened season, marking a second straight season missing the playoffs. “With the team we have and the potential we have, we have a chance to be a top six seed in the Eastern Conference. That’s something I’m going to go into training camp talking about with the guys. Instead of saying we hope we make the playoffs, we just need to start saying, ‘We’re going to do it and we need to do it now.’”