Breaking News From the ABA… 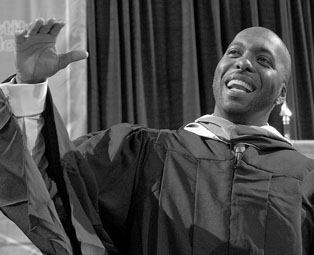 At some point a few years ago, during an interminable story meeting, someone went on the website of the ABA, the basketball minor League. On their site they have a section for press releases, which is updated numerous times daily with all kinds of peculiar information. I have no idea who writes all these press releases, but we’d waste a lot of time just reading the press releases aloud and then discussing them for thirty minutes.

Honestly, the ABA is a very confusing league. There are dozens of teams, upwards of 50, with constantly changing schedules and rosters and nicknames. And yet the league soldiers on. Which is why we started that little section in the magazine called “Breaking News From The ABA,” where we run, verbatim, our favorite ABA press releases of the last few weeks. I put those together at the last minute, as the issue is going to press, and we never have room to run more than one or two per issue. So from here on out on Mondays we’ll use SLAMonline for a weekly bonus Breaking News From the ABA update.

Before we get to the breaking news, on Friday the League announced that John Salley would be their new commissioner, which SI.com writer and ABA franchise owner Alex Wolff seems to endorse. It doesn’t say if he’s still hosting Best Damn Sports Show, and I don’t watch Best Damn Sports Show so I don’t have an answer, but he’d definitely be the first pro sports commissioner to host a talk show while being commissioner of a league.

On to the breaking news…

HEADLINE: BALTIMORE PEARLS TO HOST CHARITY GAME TOMORROW
KEY WORDS: “This is the first opportunity for our hometown fans to see all the new Baltimore Pearls,” said owner Paster Matthew Bradby. “One thing the league better be aware of is that we are a much different team from last season.”

HEADLINE: ABA ALL-STAR JUMPS ON BOARD THE EXPRESS
KEY WORDS: The Newark Express have finally got their man. Obadiah Toppin, formerly of the Harlem Strong Dogs, has signed with the team. Obadiah, O as he is known in the tri-state area, is well known for his smooth play. He’s a player who can score in the post or from the perimeter.

HEADLINE: PEORIA TEAM ANNOUNCES NAME, SPONSORS AND LOGO
KEY WORDS: The team has reached an agreement with Brewers Distributing Company of Peoria to bve the premier and naming sponsor of the team. Coach Sergio McClain’s team will begin play in November in the Central Division of the White Conference of the ABA as the PEORIA KINGS.