Breaking News from the CBA: #1 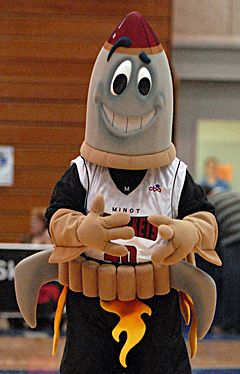 As some of you learned last week, Chuck Miller is not only a writer, but a historian and authority when it comes to the Continental Basketball Association. Although the league officially folded in 2001 under the leadership of Isiah Thomas, the CBA returned the very next season when a merger between the surviving CBA franchises and the former International Basketball Association and has been operating ever since. From time to time, Chuck is going to give us all we need to know about the CBA.

Forget the Celtics. The pro basketball team having the greatest run right now are the CBA’s Yakama Sun Kings, who defeated the Butte Daredevils Friday night 85-82 to achieve a perfect 12-0 record. Paul Woolpert’s Sun Kings are a strong loaded lineup, featuring former NBA star Moochie Norris, last year’s All-Rookie Team member Jason Forte, last year’s 3-point season champion Desmond Ferguson, and CBA forward veteran Jason Sasser. How powerful are the Sun Kings right now? The CBA’s quarterpoint playoff system awards a maximum of seven points to a team who wins AND outscores their opponent in every quarter of the game. The Sun Kings have already garnered four “7-0 sweeps” against four different teams – Great Falls (Nov. 17), Rio Grande Valley (Nov. 20), Pittsburgh (Nov. 27) and Butte (Nov. 24). At this rate, the Sun Kings are closing in on two separate winning streak records – the most consecutive wins (19, set by the Bill Musselman-coached Albany Patroons of 1987-88) and the most wins to start a season (15, set by the 1968-69 Wilkes-Barre Barons of the CBA’s earlier incarnation as the Eastern League).

The Sun Kings’ head coach, Paul Woolpert, has earned three of the franchise’s five championship rings (2000, 2006, 2007). The son of Basketball Hall of Fame coach Phil Woolpert, who helped San Francisco win the 1955 and 1956 NCAA crowns, Paul Woolpert has already amassed 216 win in his CBA career, recently passing Cazzie Russell for ninth place on the all-time CBA coaching wins list. With a few more wins, Woolpert can pass Henry Bibby for 8th place – Bibby is the only person to win CBA championships as both a player (Lancaster Lightning, 1982) and as a coach (Tulsa Fast Breakers, 1990).
OTHER NOTES:
After starting the season 0-10, the Rio Grande Valley Silverados released head coach Steve Tucker and replaced him with Oklahoma Cavalry assistant coach Derrick Rowland. Rowland’s hiring paid immediate dividends for the Silverados, as they won 87-82 over Great Falls on December 8th, as Silverados guard Mike Dean currently leads the entire CBA with a 25.3 ppg average. As for Rowland, he is a lifetime veteran of the CBA, starting his career in 1982 with the Rochester Zeniths. He earned championship rings in 1984 and 1988 with the Albany Patroons, and eventually made it to the NBA, playing for the Milwaukee Bucks in 1986. Rowland finished his CBA career with 5,783 points, and is now one of five former NBA players to currently coach in the CBA, joining Micheal Ray Richardson (Oklahoma Cavalry), Steve Wedman (Great Falls Explorers), Vince Askew (Albany Patroons) and Kenny Anderson (Atlanta Krunk).

For all the talk that an AND1 Mixtape player would have trouble assimilating into an organized basketball league, Grayson Boucher is about to dismiss that myth. “The Professor” signed with the expansion Atlanta Krunk, and has led the team in assists three out of the Krunk’s last five games. On December 10th, Boucher started for Atlanta against the Butte Daredevils, and scored 16 points – including 4-for-4 from beyond 3-point range – giving the Krunk a 106-96 win. Atlanta has also acquired some other weapons of note, including Zeck Marbury (Stephon Marbury’s younger brother), who averages 20.6 ppg for the Krunk; and Waki Williams, a 6’9 forward from Memphis who can be counted on for 17 points a night.

The Minot Skyrockets are leading the CBA’s American Conference with an 8-3 mark, with a veteran-led lineup. Ronnie Fields, who has been a part of Minot head coach Chris Daleo’s lineup for many years, currently leads the Magic City quintet with 23.6 points per game; Fields has amassed over 5,300 points in his CBA career, putting him within eyesight of the CBA’s top 10 scorers of all time. Also on the Minot roster is center John Strickland, a veteran of the “Pearl Harbor” Rucker EBC squad; Strickland was recently named CBA American Conference Player of the Week, averaging 17.3 ppg and dominating the post position.

While the Albany Patroons lost their best player, Jamario Moon, to the NBA, the team has reloaded, as new head coach Vince Askew has built a team of role-players and consistent scoring threats. Veterans on the squad include former NBA star Amal McCaskill (20.7 ppg, 12.6 rpg), USBL veterans Nat Burton (20.2 ppg) and Dajan Smith (11.4 ppg), and new talent in FDU star Chad Timberlake (16.9 ppg, 1.4 steals per game). Also flourishing in the Patroons lineup are former University at Albany standout Lucious Jordan, who along with Timberlake have become Albany’s 3-point specialists; and former Syracuse University forward DayShawn Wright, who has gone from the “Whatever happened to…” category to average 11.3 ppg in his run with the Pats.

Another Syracuse University player that is currently making strong runs is East Kentucky’s Josh Pace. Pace, who went from the 2003 NCAA championship to two seasons playing hoops in Nelson, New Zealand, has become one of the Miners’ top scorers, putting up 24 points per game for the Pikeville quintet. Also scoring well for the Miners is James “Boo” Jackson, the Eastern Michigan forward who can put up 22 points a night without fail. Coach Kevin Keathley’s Miners have come on strong this season, filling the East Kentucky Expo Center and proving that professional basketball can survive and thrive in a state previously dominated by the college game.