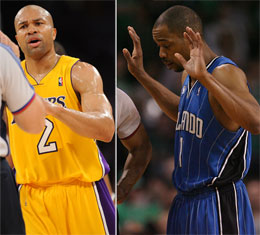 The NBA has suspended Derek Fisher and Rafer Alston for their roles in separate incidents last night. The Lakers and the Magic will be without starting point guards in Game 3 tomorrow.

Fisher has been suspended for bowling over “My Friend from Argentina!” Luis Scola. Fisher was thrown from the game with a Flagrant Two. Alston has been suspended for swinging at Eddie House’s head. House was hit with a technical foul for elbowing Alston in his stomach. Both incidents occurred in the final minute of the third quarter.

Oh, let’s not overlook this little note at the bottom of the press release:

Jackson also announced that the Lakers’ Kobe Bryant has been assessed a Flagrant Foul Penalty One for elbowing Houston’s Ron Artest in the chest area with 6:57 remaining in the fourth period of Wednesday night’s game.

Yes, Kobe has been dealt a flagrant one for this ‘bow to Artest’s chest (which lead to Ron Ron’s demonstative ejection). Both Artest and Bryant will play in Game 3.