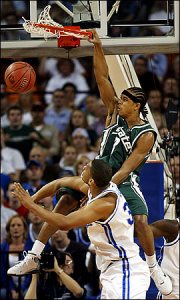 Before I begin, I would like to state this: There are no two teams in all of sports that I love more than the Los Angeles Lakers and the Michigan State Spartans!

Now that you know that, it should be no big surprise that I have cheered Lakers guard Shannon Brown ever since he committed to play in East Lansing with Tom Izzo and the MSU Spartans back in 2003. Brown has the heart, intensity and motivation that is quickly winning over basketball fans across the nation. The man even has his own campaign (LetShannonDunk.com) going in order to help draw attention his dunks for this year’s competition. The promotion from the site must have paid off as Brown was i

nformed Monday that he has been selected to take part in the 2010 Sprite Slam Dunk Contest along with Nate Robinson, Gerald Wallace and the winner of the new “dunk-in” competition between DeMar DeRozan and Eric Gordon.

How did he respond? He dropped a career-high 22 points on 8-12 shooting in a 98-92 victory over the Orlando Magic, ironically without any dunks.

With that being said, I am placing all of my bets on Brown to become the decade’s first Slam Dunk champion at this year’s All Star Weekend in Dallas, TX on February 13. Although he is not a native of Michigan (he’s from Maywood, IL to be exact), the state has adopted him after his tenure with one of our favorite college teams, and I am confident his creativity as well as his 44.5-inch vertical will be more than enough to win the crown.

What the world is just now taking notice of is what us Michigan fans have witnessed since his days in a Spartans uni which lasted from 2003-2006 — back when he rocked the No. 3 with the french braids tucked neatly under his headband. He’s been doing this thing they call dunking since way back in the day. Like the time he jumped over Penn State’s Ben Luber or the time he posterized Stanford’s Matt Haryasz back in ’04. He’s been doing this! Since the summer of going from middle school to high school.

“It was going into my freshman year at Tim Hardaway basketball camp,” Brown said in a Q&A on LetShannonDunk.com. “I actually got a steal, was on the break by myself and I went up and I dunked it. It wasn’t a clean flush, but it was good enough to where I knew I could do it. I’d been trying it in gym class my eighth grade year before that summer camp, and it wasn’t working for me. Then I finally got my chance.”

He’s been doing this! Since the ’03 High School Slam Dunk Contest went he went up against LeBron James on his home turf of Akron, OH. Not only will Brown win the contest, he deserves to win it after all he’s been through. In one year he has morphed from an unpopular NBA journeyman — who had been on four teams in three years — to a fan favorite who is appreciated all over the National Basketball Association averaging 7.6 points as the Lakers’ second-leading scorer off the pine.

Through it all, he still remains humble as indicated in a recent interview with USA Today, where he was quoted as saying: “I used to be a big stat guy, and I still am, but winning is the biggest stat of all, and I’m an NBA champion,” Brown said. “There’s a lot of guys with bigger stats than me that can’t say that. I’m trying to get better every day, as a basketball player and as a man. I have a great foundation that’s helping me do it.”

In the words of Jay-Z, if you can’t respect that you’re whole perspective is wack.

On that note, here is a dunk montage of Shannon Brown. Enjoy!