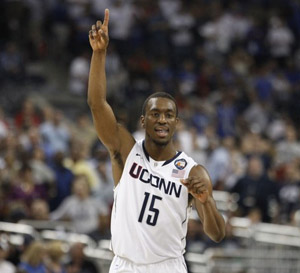 Two teams on remarkable runs will square off for the NCAA title on Monday when Butler and UConn take the floor in Houston. The Bulldogs made their second consecutive title game appearance by enjoying a magical ride as an 8-seed. They are the lowest seeded team to make the championship since Villanova in 1985. Meanwhile, since finishing ninth in the Big East regular season, the Huskies have yet to lose, winning their conference tournament in the process.

In the battle of the Cinderellas, Butler held off VCU for a 70-62 victory. Playing its trademark stingy defense, the Bulldogs were able to slow down the run-and-gun Rams’ offense. VCU shot just 39.7 percent from the field and 36.4 percent from long range.

For Butler, Shelvin Mack once again carried the team on his back. The junior guard had 24 points and 6 rebounds, while missing just three shots from the field. His teammate Matt Howard had an off night shooting the ball (3-for-10 from the field), but the senior made 11 of his 12 free throw attempts to finish with 17 points.

In the second game in Houston, UConn survived a second-half rally from Kentucky to prevail 56-55. A year after not making the NCAA tournament, the Huskies advance to their first title game since 2004.

Although Kemba Walker had another great game with 18 points, 6 rebounds and 7 assists, the real key to UConn’s victory was its defense. Kentucky shot just 33.9 percent from the field and made only four of 12 free throws. Brandon Knight had a particularly poor shooting night, making just 6 of 23 shots. Despite the weak shooting, the Wildcats had a chance to take the lead with less than five seconds remaining, but DeAndre Liggins missed a 3-pointer.

Now just two teams remain as UConn and Butler will square off on Monday. Butler would be the first non-BCS school to win the title since UNLV in 1990. As for the Huskies, a victory Monday would be the third championship in school history, all coming since 1999 under Jim Calhoun.