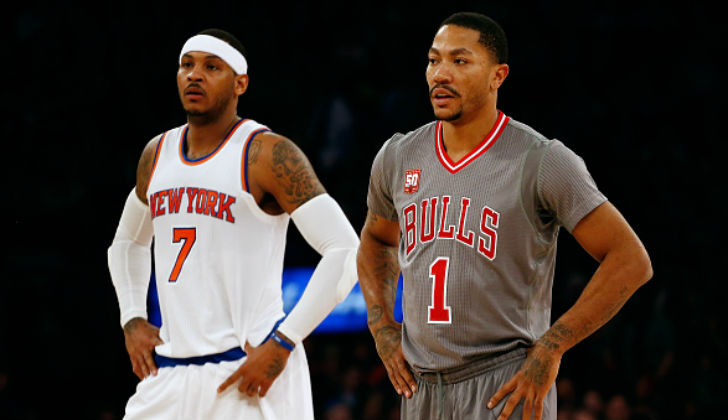 To date, six teams have secured a free agent meeting with Kevin Durant, but Carmelo Anthony is already in KD’s ear (the two superstars are Olympic teammates this summer.)

Kevin Durant: "Obviously they have a good team now with D-Rose & Melo & Porzingis so I will talk to my team and we will figure things out."

Melo is also thrilled with the Rose trade, calling it a good initial step in the team’s rebuilding plans.

The Thunder and the 73-win Warriors are perceived as the top contenders to snag Durant, and the Knicks are considered long shots. They weren’t on the original meet-and-greet list of six teams that has circulated. But the Knicks hope he will add them now that Phil Jackson has added marquee point guard Derrick Rose to the mix with Anthony and Kristaps Porzingis for new coach Jeff Hornacek.

Durant didn’t rule out a meeting. “Obviously, they have a good team now with D-Rose and Melo and Porzingis,” Durant said. “I’m going to talk to my team and we’ll figure things out.”

Like Durant, Anthony is very pleased that Rose is coming to the Garden. […] “Nobody expected that, so that was a good first step for us,” Anthony said. “ … I thought we had to step up to the plate and make a splash some kind of way.”