Carmelo Anthony on if Knicks Asked His Opinion Before Hiring Jeff Hornacek: ‘Whatever Phil Did, He Did on His Own’ 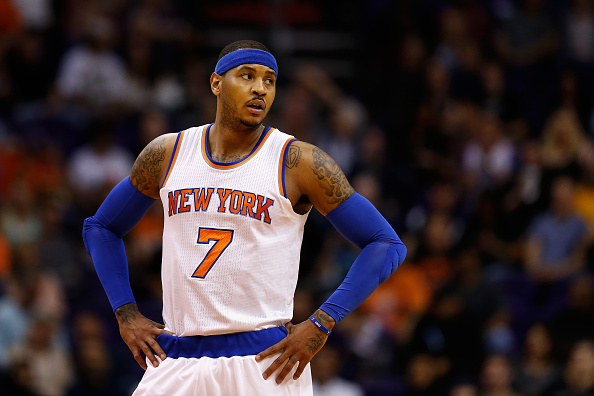 Carmelo Anthony sounds genuinely excited about the Knicks’ new head coaching hire of Jeff Hornacek. But he did add in an interview this week with WNBC-TV that nobody in the team’s front office asked him for his opinion. Which is a little bit surprising, given that Melo is the face of the franchise. Details, from ESPN:

Anthony said Saturday that he believes Hornacek gives the Knicks a chance to turn things around. The club has missed the playoffs in each of the past three seasons.

“It sets the stage for us to do that,” Anthony said. “[It’s a] new opportunity, something new to play with, something fresh, a clean plate. So hopefully we can build off of this momentum.”

Hornacek was offered the Knicks’ job by Jackson and general manager Steve Mills earlier this week, and negotiations on a contract with the club have begun, league sources said.

Interestingly, Anthony said he didn’t share his opinion on the coaching search with Jackson before Hornacek was offered the job.

“Whatever Phil did, he did on his own,” Anthony said.

Anthony said several times in recent weeks that he hoped to share his thoughts on the team’s next coach with Jackson and Knicks management.