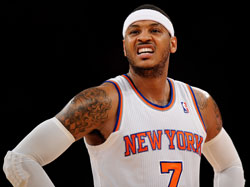 And here we were thinking the Carmelo Anthony free agent saga had come to an end. Nope. According to multiple published reports, Anthony continues to struggle with his decision. The New York Knicks (who insist they’re still confident he’ll re-sign), Chicago Bulls and Los Angeles Lakers are all apparently still in play for Melo’s services. Per the Daily Herald:

(Chicago Bulls head coach Tom Thibodeau) has played a significant role in keeping Anthony interested in the Bulls, according to a league source. As of Thursday evening, the Bulls were trying to figure out what it would take to close the deal.

If Anthony committed to playing for the Bulls next season, they could begin talking to the Knicks about sign-and-trade scenarios. Otherwise, the Bulls have the means to clear about $18 million in cap room by using the amnesty provision on Carlos Boozer and trading away other players for draft picks.

The Bulls have pushed the idea they can give Anthony the best chance to compete for an NBA title right away. Thibodeau and the Bulls envision a lineup of Anthony, Derrick Rose, Joakim Noah, Taj Gibson and either Jimmy Butler or rookie Doug McDermott. Of course, nine days have passed since Anthony visited Chicago, so there’s no telling how or when this will play out. The NBA world continues to wait for decisions from both Anthony and LeBron James.