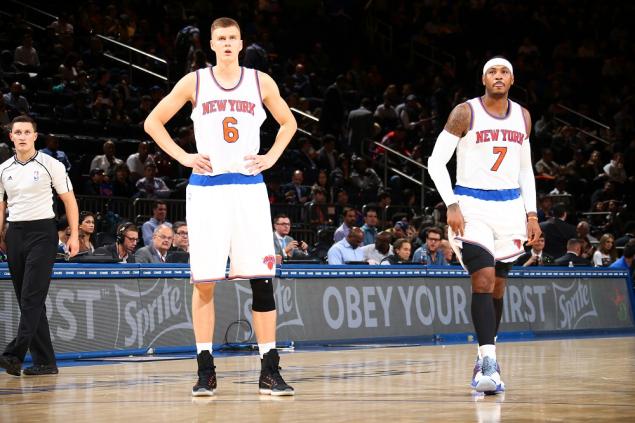 Before handing the keys to the franchise over to his very tall, very young and very popular rookie teammate, Carmelo Anthony hopes to win a ‘chip or two alongside Kritaps Porzingis.

The big fella has obvious star appeal, and Melo wants no credit for his fast start.

The big Latvian with a silky-smooth jumper is averaging 13.2 points and 8.8 boards in 26 minutes of burn.

Anthony, who has four years left on his contract, recently told confidants about Porzingis: “He’s gonna lead this organization long after I’m retired. Hopefully we can hoist one or two [championship trophies] before that happens.’’

Instead of jealousy over Porzingis’ sudden fame, Anthony is relishing it, becoming “a big brother” as promised in training camp. Anthony is almost always looking for the rookie-of-the-year candidate. And he wants no credit for the kid’s stunning start. […] “We’re just building it,” Anthony said of their relationship. “I’m here to help him and use my experience and help him get his feet wet, and he’s doing a pretty good job. I don’t want any credit for that. He’s doing a good job on his own. Learning the game and getting a feel for the game. You can see each game he’s getting better.”

Porzingis said he’s got to be a more consistent force, admitting it was an issue in Spain. He has saluted mentors Anthony, Jose Calderon and Sasha Vujacic. […] “This past two seasons when playing in Spain, I used to have ups and downs,” Porzingis said. “I really wasn’t consistent. It’s a level higher, better basketball. It’s even harder to be that consistent when guys go into detail watching film on you and get you out of your rhythm. That’s the thing with every game, every season I got to get better at and be more consistent to make sure I help the team every game.”