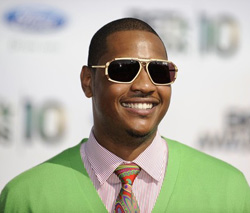 The proposed four-team trade involving Carmelo Anthony has “legs” according to the Denver Post, though only if Melo agrees to a contract extension with the Nets.

All parties want to get a deal done before training camp on Monday, so this weekend will be critical.

According to multiple NBA sources who say a four-team trade that would send the Nuggets’ Carmelo Anthony to New Jersey could happen this weekend, as talks are ongoing.

The blockbuster trade, according to a source close to the negotiations, has “legs” but is complicated by the number of teams involved and the need for Anthony to sign a contract extension.

If the current trade being discussed goes through, it would send Anthony to the Nets while Denver would acquire Nets’ rookie post Derrick Favors, the No. 3 overall pick in this year’s draft. The Nuggets also would get forward Andrei Kirilenko — and his expiring $18 million contract — from Utah. He averaged 11.9 points per game last season but battled injuries. And, as of late Friday night, the proposed deal would land the Nuggets a 2012 first-round pick from New Jersey, which previously belonged to Golden State.

As Hochman points out, the Nuggets are considering the deal because it offers the team a chance to get “younger, bigger and free up salary cap space.” Not bad options considering the tight situation Carmelo’s put them in.

If the deal goes through, the Nets will be downgrading at PG as well as giving up their high-potential PF in rookie Derrick Favors.

Sure, Melo wants to be in a bigger market and play for a contender. But can New Jersey provide that? Not yet. But Chris Paul could help…