Catching Up With Some All-Stars 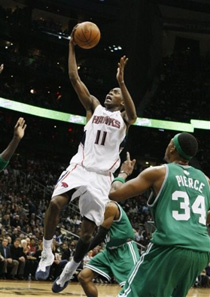 Rajon Rondo plans to put on a show in Dallas

He’s been called the Celtics’ barometer, engine, and daily triple-double threat. Now you can call him an All-Star. “It’s a great honor to be considered an All-Star,” says Rondo, “It’s definitely something to take pride in.” Asked whether he’ll be a scorer or set-up man in the big game, Rondo replies without hesitation: “Get my shots off.” His scoring prediction: “Like 39 [points], something like that.”

Being an All-Star never gets old

“It’s an honor every time you get chosen, you never take it for granted,” says Paul Pierce, who is about to make his eighth All-Star Game appearance.

Hawks guard Joe Johnson mentions the team’s success as one of the reasons he will be making his fourth appearance. “It’s always an honor, it never gets old and I’m just as excited as if I made it my first time,” he says.

Johnson views the selection as a team accomplishment. “Not only does it mean a lot to me but it should mean a lot to everybody in this locker room because it’s definitely a team s

“I just had a lot of emotions running through me,” says Hawks center Al Horford. “I talked to my mom first,” he says, “she was very aware of everything that was going on so she was the first person that I called and she is still jittery about it.” He said former Florida teammate and current Bulls center Joakim Noah was also one of the first to congratulate him.

Asked what All-Star events he’s looking forward to, Horford says he will definitely make it to the dunk contest. Any predictions? “I think it’s going to have an impact whoever gets in as the fourth dunker,” Horford says. Thoughts on who will win the dunk-in? “I think [DeMar] DeRozan is the guy…we got a chance to play against DeRozan a couple of times and he can jump.”

Will you ever participate in a Dunk Contest? “No,” says Horford laughing, “just because I can get up pretty high and stuff but I just don’t have the tricks…the dunk expert here is Josh Smith.”

Hawks forward Josh Smith can certainly fill up a stat sheet. He also brings the kind of hustle and defense that doesn’t make the box score. To those who watch the Hawks, Smith is as valuable as any member on the team. On not being voted into the All-Star Game, Smith says, “I really don’t pay attention to other teams and other people and whatever decisions other people make…I can just only focus on my team and the circle that we have as a unit. And as long as I’m appreciated here and I know the things that I do and bring to the table here, that’s all that I can control.”

Asked if intangibles are sometimes overlooked, he responds, “They can be, but they definitely don’t get overlooked w

ith your teammates and your coaching staff.”

You know you’re good when your name keeps coming up in the other team’s locker room.

“[Jamal Crawford] played like an All-Star every time he played us,” says Celtics center Kendrick Perkins.

Although it is more glamorous to be a starter, Crawford’s move to the bench has had a psychological impact on Hawks opponents. They know that no matter how much momentum is gained; Crawford is waiting on the bench.

“I think honestly I got overlooked this year because of the fact that I come off the bench but that’s fine,” he says. “I think honestly if I ever make an All-Star team, great, but I rather have my peers’ respect and people I play against every single night.”

He certainly has that.