Cavaliers Win Game 2, Even Finals At 1-1 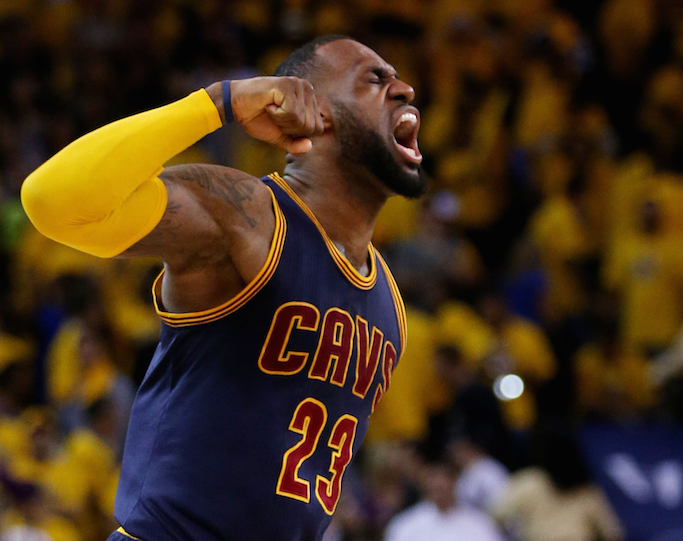 It felt like everyone counted the Cavs out when Kyrie Irving went down, and maybe that made sense—the Warriors won Game 1 outright, so now Cleveland was supposed to win four of the next six…without their second best player?

And yet—Sunday night, with Irving sidelined for the season and the one and only Matthew Dellavedova in the starting lineup, the Cavs prevailed over Golden State, winning an insanely hard-fought game that, like the first of the series, needed extra time to find a conclusion. Your final score: 95-93.

Cleveland was going to need a monster game from LeBron to stand a chance, and Hey, what do you know? Thirty-nine points, 16 rebounds, 11 dimes, all over the course of 50 grueling minutes played on the court. He drove to the hole time and time again during the overtime session, sometimes finding success, other times getting pretty clearly hacked, though it’s tough to fault the refs for letting the players play in the tilt’s most important moments.

For the Warriors, Klay Thompson led the way with 34 points, but the bigger Golden State-related story was the absence of Stephen Curry, who disappeared for most of the night, finishing with 19 points on 5-23 shooting from the field (and a rough 2-15 from deep). Curry had a chance to put the Dubs ahead in the game’s final moments, but he airballed a mid-range jumper—and a pretty clean look at that, especially for the best shooter in the NBA—a shot symbolic of his night as a whole.

We now head into Game 3 all tied up, and though the Cavs’ worries haven’t exactly dissolved—they just baaaaarely won a game that saw the Warriors’ best player perform worse than he has in a long time—it’s now clear that those who thought the final round of these Playoffs was a wrap can chill the hell out. This is still gonna be a freakin’ great series. Buckle up, yo!

Game 3 is Tuesday night in Cleveland.