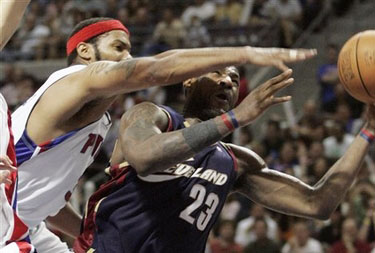 I’m a skinny dude—a lanky ass mofo, if you will. I used to think that because my arms are more or less pencils and because my chest is more or less inverted, a stronger guy should never be allowed to call a foul on me unless I blatantly hack him. (To paraphrase my thought process during these situations: “You’re not a bitch, big man, are you?”) At the very least, the degree to which I was riding my opponent would have to be obvious enough that it warranted the call. Otherwise, I’d think the dude was just a big guy that couldn’t handle his own bulk.

The thing is, after years and years of pissing people off with my length on questionable calls, I realized that if you’re riding somebody, it doesn’t matter how big you are. It doesn’t really matter as long as the defensive blanket in question is fouling the dude going to the rim. Really, whether it’s Popeye’s anorexic girlfriend Olive Oil or Pillsbury the effing doughboy, it doesn’t matter—all that matters is that the guy is wearing the defender’s arms as if they were an extra layer of clothing (Brand name, Excess Contact).

More to the point, if the excess hackage gets in the way of the offensive player’s quest to the tin, somebody—whether it’s the guy on the court during pickup or the ref in an NBA arena—should probably blow the whistle. Trust me, I’ve nearly been punched over arguing in favor of exactly what Rip Hamilton did to LeBron James.

“But I weigh less than twice Kate Moss!”

So yes, I adamantly believe that Rip Hamilton draping himself all over LeBron on King James’ foray to the rim with time winding down warrants a foul.

And if you’re actually dumb enough not to believe me, there’s still truth steam rising from Mike Brown’s head as he continues to jump up and down in his mind. What’s the over/under on amount of times Mike Brown tossed in his sleep last night? 600?

Even so, if Larry Hughes makes an angled 7 footer—actually, a tougher shot than it looks when you’re not jump-stopping off of a few dribbles, but still…–none of that matters.

As for Sheed tossing Anderson Varejao’s floppy mop to the floor before burying a fadeaway of ridiculous difficulty over LeBron: Give him credit. The dude’s a fourth quarter baller. Plain and simple.

And I’ll leave the familiar déjà vu I-scream to our commenters. That goes for the LeBron kick out to Pavlovic before he walked and the game in general slipping away from Cleveland. Have at it.

I also took notes, but I was really tired and my eyes started to bleed (understandably) in the fourth quarter so I had to stop before crunch time:

–Ernie, where are you? Come back. Now. Please? And bring some Vitamin Water inspired yak butter to throw at Kenny.

–Someone forgot to tell Chris Webber that it’s 2007. His legs think it’s 2002. And the results are mixed. Dunks? Good. Between the legs randomness? Not so good.

–Two Jason Maxiell facials counter a ridiculous reverse flush from LeBron and negate any momentum the Cavs could have gained from LeBron’s fast start. Doug Collins talks about Detroit’s interior depth as being perhaps the deepest in the league. It’s worth mulling over, though I have neither the time nor the interest in figuring out if he’s right.

–Collins just said that the Pistons have a wall to prevent LeBron’s penetration. You mean like…

–Steve Kerr, perhaps dealing with momentary amnesia, says the Cavs have no punch in their step. In a related story, they have no kick in their hand movements either. Actually, “punch in your step” could be a phrase. You never know about these things.

–Damon Jones: X-Factor. Li-Ning’s finest comes in and drills a corner 3. The Pistons’ defense, spread like the penetration-protecting wall that they suddenly aren’t, lets LeBron waltz through for what feels like his sixth dunk. I think it’s his third. Those five points, coming after a Varejao tip combine for a 7-0 run that puts the Cavs up 3, 23-20. Suddenly, it’s a different game.

As such, Jason Maxiell is no longer the most important guy on the floor. Just as I type that Maxiell shoves my foot in mouth with a dunk. And-1. A minute or so elapses, and Maxiell uses his length to steal the ball from LeBron before getting it back on the break for another flush. Just like that it’s a new game. Suddenly, Jason Maxiell is the most important player on the floor. 11 points in 11 minutes.

And circles can go to hell.

–LeBron is finding the supporting cast with relative ease, though it’s somewhat surprising that there’s not more pressure on him late in the shot clock. He’s just picking Gooden and Pavlovic out on quick reads out over the top. With the Detroit defense seemingly frozen on him, his teammates flash high post and the Pistons are late on their rotations.

–LeBron goes from passer to shooter, getting to the line twice and then getting a 3 point play on the break. It’s 48-37 Cavs. It ends up as a 12 point game at the half. Chauncey Billups has taken one shot.

–Good third quarter team that they are, the Pistons start the period on an 8-2 run. And wouldn’t ya know it, Chauncey is back in the flow, drilling a jumper and dropping two assists, one to Hamilton for a jumper and another to a wide open C-Webb under the basket. A C-Billz 3 pushes it to 11-2 for the quarter.

–When did Sasha Pavlovic become a monster with the shot clock winding down? Funny thing about this is that it’s Cleveland’s only offense.

–Detroit’s defense is amazing. They’ve completely shut Cleveland down. The Cavs can’t get anything. They’ve scored 2 points in the last 7:50.

–Kerr and Collins both make a good point: The Cavs need to get the ball out of LeBron’s hands because it helps them space the floor because Detroit would be unable to gear their entire defense towards stopping the one man with the ball in his hands. Two 3’s (one by Gibson and one by Marshall) give the Cavs the lead back at the end of the quarter.

Buckle your seat belts! This game is a Volvo!

–Sheed, as is often his custom when he gets in early foul trouble and struggles in the first half, has woken up in the fourth quarter.

–Every time either team gets the ball one of their guys is getting stripped. It’s like strip-tease and the tease is the very idea offense. Even so, the quality of each team’s D is to be admired.