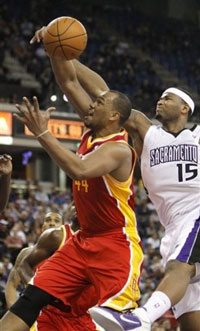 Six years ago, all 30 NBA teams passed on the Houston Rockets’ Chuck Hayes. This time around, Hayes is in demand as an unrestricted free agent once the lockout is resolved. But it’s not resolved and that demand begins in China.

“China would be the ideal place as Hayes popularity there is unbelievable,” said Hayes’ agent Calvin Andrews of BDA Sports Management.

“We have a great relationship with teams over there and Chuck would be a fan favorite.”

Hayes can thank Yao Ming for the extra exposure. Anyone who has played significant time alongside Yao has reaped the benefits of receiving an extended fan base in China.

China offered Hayes a lucrative deal early in the summer according to Andrews. The offer was bad timing and Hayes’ camp turned it down. They won’t be as inclined to do so again if a new CBA is not reached in due time.

“If nothing is figured out by the end of October, then I’ll look at China again or somewhere else,” Hayes said.

Undrafted out of Kentucky, Hayes made a name for himself as a rebounding defensive bruiser. Standing 6-6 as an undersized power forward, Hayes utilizes his upper body strength and his compact frame to hold his own against taller opponents.

“I just like to compete,” Hayes said. “I take it as a personal challenge when a player tries to post me up. I challenge myself mentally and physically and my will keeps me from failing.”

Now that teams know what he’s capable of, his lack of size seems to be a non-issue. There are several NBA franchises expecting to open up their checkbooks in hopes of luring him from the only NBA team he’s ever played for.

“If a team wants to win, pick up Hayes,” Andrews said. “He does all the intangible things that don’t appear on the stat sheet. Every team needs a player of his caliber.”

Many believe Houston has a leg up when it comes to retaining Hayes, and the reason: They’re the only team that gave him a real opportunity to prove he could play at this level.

In the meantime, Hayes is now picking up the pace on his workout regime, as he took some time off this summer to recuperate from the rigors of last season.

He was scheduled to participate in the “Lockout League” held in Las Vegas starting next week, but has decided to tend to other matters.

“I was going to play but I changed my mind. I need to spend some time with the family,” Hayes said. “It’s a good thing that they’re doing, though. It should be a successful event.”

Hayes just turned 28 and his next deal figures to be the long-awaited reward for the path that he has taken to become the player he is today. He’s never averaged double digits in points nor rebounds, but his impact speaks louder than numbers and that is why he’ll continue to irritate big men for years to come.