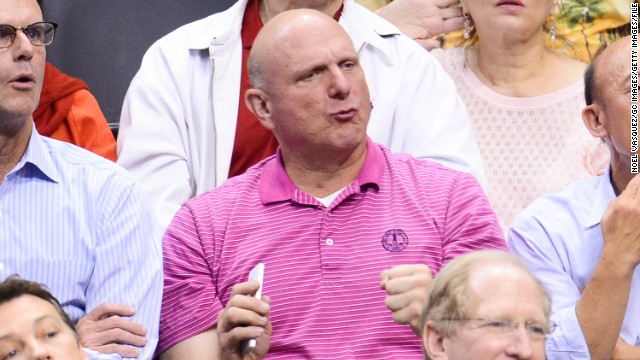 With the Los Angeles Lakers watching the NBA Playoffs from the comfort of their couches, the LA Clippers are making use of their vacant locker room are at Staples Center.

Steve Ballmer, the jolly bald-headed lunatic you see jumping and screaming from his courtside seat, turned the space into what sounds like a hangout area for obscenely rich folks.

Steve Ballmer has turned the Lakers' locker room into an "owner's lounge."

The first-year owner is clearly enjoying his NBA experience.

With his manic enthusiasm and deep pockets, Ballmer was going to swoop in and pry Los Angeles from its decades-long love affair with the Lakers. That was the plan, anyway. But even though the Clippers finished with 35 more victories than the Lakers, they trailed their fellow Staples Center tenants in the local regular-season ratings. […] The Clippers are a reflection of their new owner, all right. But it is not the goofy, giddy guy seen gyrating like a giant inflatable tube man near his baseline seat — most memorably during a January halftime performance by the singer Fergie that prompted the real estate mogul Donald Trump to describe Ballmer as “an embarrassment to rich people.”

Harking back to his days as the manager of his high school basketball team, Ballmer sometimes attends Clippers practices and retrieves basketballs for the players during drills. […] “I didn’t know what to expect,” Doc Rivers, the Clippers’ coach, said. “The guy’s worth $24 billion. I have to think if I had $24 billion I probably would be different. I hope not, but I probably would be. He’s the most normal $24 billion guy I know.”

“You’ve got to build an interesting product, have a brand that people can understand, try to build a product that can be successful,” Ballmer said. He added: “There’s a natural shorter product cycle because players get older. I think the notion that you have to be tenacious and hard core really applies. You can’t be ripping things up and starting over again.”