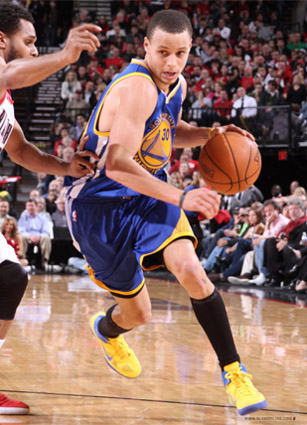 College can be awkward. Strange roommates, frat parties, walks of shame. Class is usually the least awkward and most boring part of the whole routine. Think sweatpants, PowerPoint slides and final exams. For Wardell Curry and his new classmates at Davidson College, though, classes during the Fall 2011 semester haven’t been so boring.

“One of my professors had the roll call and he was going through everything and he called my name, ‘Wardell Curry,’” says Curry. “I had to raise my hand and tell him, I’m here, but I go by Stephen.”

On a college campus with less than 2,000 students, where less than three years ago he led the school’s basketball team to the brink of an improbable Final Four bid and established himself as one of the best players in the history of college basketball, hearing the name Stephen Curry is enough to give an entire room full of students certain whiplash.

“They all kind of stared at me for a second,” says Curry. “But that’s as awkward as it’s gotten.”

While the majority of the NBA scrambled to find an overseas job or a fancy faux internship when the lockout hit, Curry had already planned his return to Davidson, which sits just north of his hometown of Charlotte, NC. In June, with the Golden State Warriors out of the Playoff mix, he contacted his former college coach, Bob McKillop, to explore the possibility of returning to campus in a full-time capacity during the impending work stoppage.

Fast-forward five months and Curry was back at school, trying his best to be a regular kid. He’d wake up at 6:30 a.m. to make the hour-long drive from his new permanent home in Charlotte to Davidson’s campus in time for his 8:15 class. His course load included classes such as “History of Education” and “Qualitative Research Methods.” Between those classes, he’d eat lunch or catch up on homework in the student union. And when he could, he’d practice with the basketball team, offering McKillop and the players input from a unique perspective.

McKillop says his star pupil had no problem fitting in. “It’s like having one of your children return,” says the coach. In fact, having Curry around is validation for some of the program’s recent recruits, like junior guard JP Kuhlman, who credits Curry for helping put Davidson atop his list of college choices. “You see that kind of success, and you’re attracted to it. Yeah, it definitely contributed,” says Kuhlman.

McKillop says his freshmen, sophomore and junior classes “knew about Davidson College to a large degree because of what Steph and his teammates did.”

All Steph did was turn a dormant mid-major into a giant killer over a three-year college career that ended with the school’s all-time scoring record, a trip to the Elite 8 and a spot in the top 10 of the NBA Draft.

To call Curry an immortal on Davidson’s campus is an understatement. And yet for a couple of months, the most prolific Wildcat basketball player ever to lace up a pair of Nikes had the incredible and strange official title of “student manager.” He was just the second to serve as such in Davidson’s century-long hoops history. The other? Twenty-two-year-old Billy Thom, now the program’s director of basketball operations—and Curry’s boss.

“There’s a trivia question you can ask,” Steph jokes.

Labels aside, Curry’s used his time back home to prep for a breakout third season. After playing for Team USA’s 2010 FIBA World Championship team last summer, the Wildcat-turned-Warrior put on a sophomore campaign in which he bumped his scoring from 17.5 to 18.6 a night despite battling injuries and playing fewer minutes in fewer total games. Even while hobbled, Curry led the NBA in free-throw percentage (93.4) and finished third in three-point shooting (44.2 percent) while dishing out 5.8 apg.

So how does a young, 6-3 point guard with a dead-eye jumper and a unique knack for passing get better? Studying, of course. Curry says he’s been watching film this summer. “I’m working on seeing the game a little better at the point guard position, just to make my game that much better.”

And Steph’s had plenty of time to watch, since he was sidelined from May to mid-September, rehabbing a nagging ankle injury that limited his range of motion last season. His first full game action since being cleared for basketball activity came in Chris Paul’s Winston-Salem charity game in early October. Curry’s absence from the summer hoops circuit was spent in the gym, working with fellow Charlotte-based pros like Gerald Henderson, Derrick Brown, Antawn Jamison and Anthony Morrow.

Curry wanted the lockout to end as quickly as any NBAer, but he admits the prolonged offseason provided him the unintended benefit of allowing the ankle to heal in proper time.

“I think I would have been ready for the beginning of training camp when it started, I just would have been a little limited with what I could do,” says Curry. “With the lockout, I can just pace myself and not really push it.”

Despite that luxury, if the season were in session, he says, “I would be 100 percent ready to go.”

When he and his Golden State brethren take to the court again, they’ll be led by a new coach: long-time Knick and Pacer point guard and former lead ESPN analyst Mark Jackson. Hopefully for Curry, his third coach in three seasons will finally provide some stability. Jackson got off on the right foot less than a week before the lockout hit; he toured the country to meet one-on-one with the team’s cornerstones, including Curry, Monta Ellis, David Lee and Dorell Wright.

Consider Curry impressed. He says of Jackson: “He’s a point guard, and hopefully he can school me to get to that level he was at while he was a player. I’m all ears to that, so I’ll be excited to get back.”

Many a player has done the “back-to-school” routine, but few have taken it as literally as Curry. Before the lockout ended, he was working on a senior research project about NBA players’ tattoos as related to their public image (he’s already tabbed Ellis and Morrow as primary sources). He’d sign autographs on the way to class, then slink into a seat and pine for participation points like any other student. From the hardwood to hardcovers, Curry did it, growing pains and all.

“It was weird for me at first to get back into school mode,” he says. “It was just weird sitting at a desk. That first class, I didn’t realize how long it took for an hour and fifteen minute class period to go by on that first day.”

Curry finds solace in knowing that Davidson’s campus is a stone’s throw from Charlotte, the place he’s called home for most of his 23 years. His family and his newlywed wife Ayesha are from Charlotte, and his star-studded high school career at Charlotte Christian landed him a scholarship just up the road in D-Town. (Dad Dell’s Virginia Tech Hokies extended only a walk-on invitation.)

Steph ruffled some feathers this summer when he told the Charlotte Observer he wouldn’t mind playing for the Bobcats one day. But as Golden State fans suddenly busied themselves with the fear of Curry’s eventual departure, they failed to appreciate his simple, undying loyalty to the city that built him as a player. The city that took him from unwanted high school prospect to one of the college game’s most feared offensive weapons. The city he puts on for, and keeps coming back to.

As he explains it, “I love Charlotte to death, my wife does, too, and you can’t really predict what’s going to happen down the road. But we are so happy to be a part of Golden State and what’s going on there and the direction we’re moving in as a team. That’s my team right now, that’s what we’re going to do. There’s nothing pulling me to Charlotte, besides the fact that this is where I grew up. I’m sure anybody would love to play in their home city at one point in their career. But I don’t think that would be a foregone conclusion once my contract is up.”

Almost in unison, McKillop echoes Curry’s comments, swelling with pride: “He’s fully immersed in his job with Golden State, but as fully immersed as he is in that and his commitment to that, he’s never lost sight of his roots. And that’s not just Davidson College, that’s the city of Charlotte.”

On the flip side, it would be hard for Charlotte to lose sight of Curry. The aura of his basketball gift and his rare, genuine drive toward a college degree, on a campus as intimate as Davidson’s, at the apex of a budding launch into superstardom, is hard to ignore.

His sincerity is matched only by his talent. His campus presence only by professional potential. Coach McKillop knows. He watched him from college to the NBA and then back. Asked whether Curry may one day come for his job now that he’s got some experience as an assistant, McKillop hesitates. Because Curry’s return to campus, and to the community, wasn’t about landing a new job or killing time during the NBA lockout. It was about a kid who’s going places—without forgetting where he’s been.

Assuming he gets his homework done first.