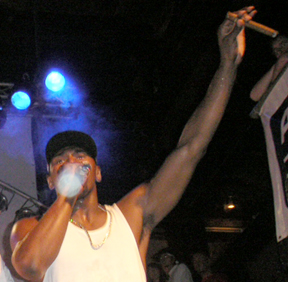 After learning that Ron was going to be a supporting act of Fat Joe in Germany me and my friends Ben and Simon went on the long trip (based on German standards) from Frankfurt to Braunschweig, a four hour car ride, last Friday.

The location, a place called Jolly Joker, is a really nice club. There are even pizza and ice cream places in the club. Nevertheless, it was emptier than a WNBA game. There was space for around 1,000 people, but only about 300 came. (You have to keep in mind that I am not a good guesser, but still…)

Since it was so empty we ended up right in front of the stage. First, there was a Geman-Cuban teenage rapper/singer that currently has a song in the German charts. Apparently, he couldn’t convince his mother to iron his pants before the show though.

But never mind, because when the kid left stage Ron came out (after his three homies from QB entered the stage). It was unbelievable to see Ron in person and so close up! They all came out dressed in K1X gear from head to toe (Ron also in a QB hoodie). Needless to say they all wore Ron’s Chiefgliders.

After the first track Ron came down the stage and stood right in front of us while rapping and getting his cigar lit by some fan. Shortly thereafter, he asked people to join him on stage. My boy Ben was one of the lucky ones. He didn’t manage to climb over the barrier because security was holding him back, so Ron lifted him over the barrier while somehow holding the mic and his cigar at the same time. Now that’s what I call skills!!

Ron asked my boy Ben to dance with some girls that also got on stage, but that had been bothering us the whole evening. So Ben just bounced on stage right next to Ron himself and his crew. Later, Ron jumped the safety fence and dove into the crowd. He poked his way through mostly surprised German middle class suburban people. I’m proud that I’ll be able to tell my grand children: I poked around with Ron Artest!!! (Not sure if that’s exactly what I’d tell them, but whatever — Lang)

Having finished his last track, Ron wanted, of course, to be the first one to leave stage but he’d forgotten a towel and seemed to be looking for something else, so he ended up being the last one. Definitely a detail to improve for the future.

Fat Joe and overpriced concert tickets were probably the ones to blame for the small crowd because Ron was announced as a supporting act only 3 days before. His performance was off the hook and amazingly energetic. Much love. I hope he will have another show in Germany. If it happens to be in Frankfurt, I guarantee a sold-out concert!!

PS: We are also very curious to see his little brother playing next season in the third division over here. I haven’t figured out if it’s a good or a bad thing he’ll play against people I used to play against 2 or 3 years ago. Still, I will definitely watch his games because there are five Regionalliga teams in a 30 minutes car ride range from my house.