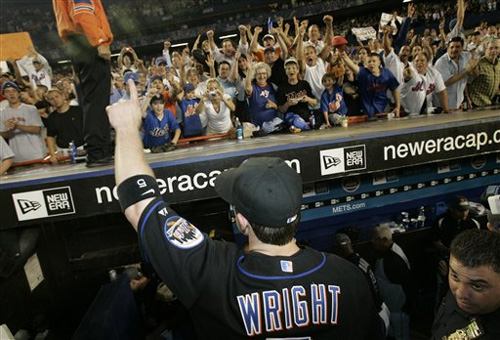 The baseball playoffs are set. We’re closed for Yom Kippur, one of the few Jewish holidays which I observe to the letter of the law, or at least how my parents taught me. It’s nearly 4 PM, and I’m really hungry. Hallucenating a little bit. there are people all over the world that are starving, and this kind of fast is nothing to them. Man, I’m soft. Back to beisbol…

Mets-Dodgers. I am now at war with Ben Osborne. We expected this for a few months now, but it’s ON, starting Wednesday at 4 P.M. I’ll be out at Shea on Thursday night for Game 2. Payback for 1988.

Lang is trying to pretend like his baseball season didn’t end back in May by playing the “oooooh, there all these ex-Braves on the Dodgers” card. Loser talk. He kept sending us all emails from the Braves beatwriters blog, like anyone wanted to read about something as depressing as the Atlanta Braves. Is there anyone outside of their 15 fans that wanted to see those guys back on national TV, melting down and getting embarassed again? I truly pity them and their racist tomohawk chop.

There hasn’t been a sporting event that’s really gotten me fired up in months, other than the Manning Bowl and the Giants pulling that miracle rally against the Eagles out of their a$$ (I have concerns about this Giants season now. BIG concerns.). Maybe when the Mets buried the Braves and pissed on their grave, but even then it was inferior competition with their weak trash talk about how they would scare the Mets by cutting the lead to single digits. That didn’t happen. The Mets had their playoff spot locked in MAY. Lang was appalled when we went to a Mets game in April and the fans were giving Carlos Delgado a curtain call. He used cliches like “It’s a long season” and took his Braves hat off his head for safety reasons. I warned him that the Braves were over and that the only thing he’d have going this year is hating on the Mets.

Khalid is anti-Mets these days, just to piss me off. I’m writing this before the MNF game featuring the Eagles, which I assume they will win 42-10. Eagles, such a happy story. 3-1. Beating the Packers, 49ers, and Texans. Losing to the Giants. Lang’s Falcons are flying high as long as they don’t put the ball in the air. Either way, the Bears will murder everybody. But Khalid is against me during the baseball playoffs. We’re enemies.
SLAM art director Stephen Goggi is a Yankee fan. See you in the series pretty boy.

There are many Mets fans around the office, as we are in NYC after all. I will not make any predictions because that’s how you jinx your team. I have some silent hope and reasons to believe that I will keep to myself. After months of living life without watching a sporting event that would increase my heart rate by even one BPM, I’m excited to jump back into it.

Okay, we’re at around the 21st hour of fasting. Dizzy. Going to meet a complete stranger from craigslist to buy my game 2 tickets. Hopefully he doesn’t steal my kidneys.