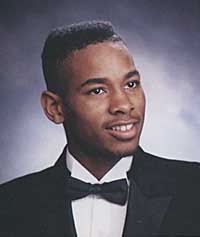 Saw that Derek Anderson got waived by the Heat, and had a few thoughts on DA:

• Was he the highest-profile NBA player to be represented by Master P/No Limit? I know he has a No Limit tank tattooed on one bicep, along with his nickname, “The Prosecutor.” Yeah, I don’t get it either. (I mean, I get how it works with “DA,” but is it supposed to be intimidating or something?) Well, maybe Ron Mercer was higher-profile. Maybe.

• Who would have guessed that DA and Mercer would have been the least-successful NBA players from Kentucky’s ’96 championship squad? Heck, even Walter McCarty still has a job (and not just because of his lovely singing voice). And DA must get hell on campus (assuming he goes back) for getting traded straight-up for Gerald Fitch.

• Somehow, despite his diminished status over the years (he holds the dubious honor of being the first player cut under the luxury tax amnesty program), he’s never stopped getting player-issue shoes from Jordan. And given his propensity for wearing older model Air Jordans (IIs, IIIs and IVs) and his good fortune of winding up on teams who wear some combination of Bulls colors (Spurs, Rockets, Blazers, Heat), he’s consistently gotten the illest shoes. Maybe he can get picked up by Toronto or Atlanta next.

• Despite being born in 1974, Anderson lists his favorite TV show as “Sanford and Son” (which went off the air in 1977). I seem to recall that, before everything was released on DVD, he prided himself on having collected every episode on tape. Derek’s middle name, of course, is Lamont. Big dummy.