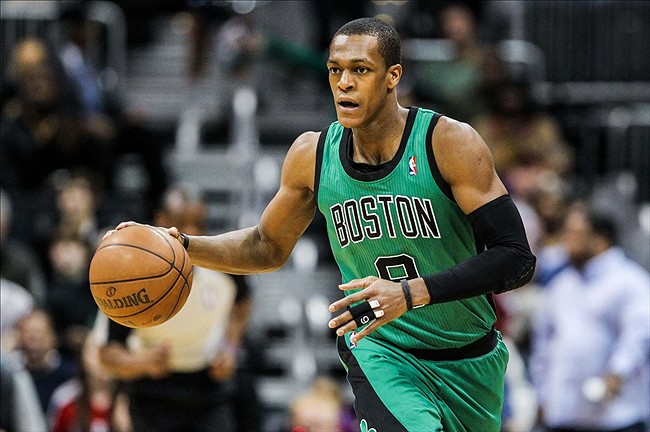 Speaking Tuesday prior to the team’s annual charity golf tournament, Celtics co-owner Wyc Grousbeck (who raised eyebrows by wondering aloud if Rondo is coachable or not) and president Danny Ainge both said they want Rajon to stay in Beantown long-term.

Rondo is about to enter the final year of his current deal, and Ainge expects big things from his floor general. Per the Boston Herald:

“Absolutely it’s my goal to keep Rondo here,” said Grousbeck. “We all think that and I think Rajon wants to stay, and will be happy to stay. We’ll see how negotiations go. I haven’t spoken to him recently, but we don’t discuss that kind of thing. We’re looking forward to the season.”

“There’s a lot of people who have flat-out made stuff up and it’s become a hot topic. Very credible people have made stuff up and that makes it worse,” said Ainge. “A lot of people out there still have some belief that there’s truth in the rumors. I can’t say it more emphatically. My hope is that we can have a long-term relationship. Players like Rondo are hard to find. Here we are trying to make big deals, and it’s hard to get free agents without players with some cache. Rondo is our best player, simply.

“Right now Rondo has indicated to me that he wants to stay in Boston,” he said. “He knows who his teammates are, he loves playing with Jeff, Avery and Sully, he spent a lot of time with Brad this summer and that mutual respect has grown.” […] “I expect the best year of his career,” said Ainge. “He’s worked really hard this summer and I think Rondo is going to have the best year of his life. He’s a year removed from the injury, he’s growing and improving as a leader. He’s in the prime of his career. What happened to him last year was frustrating, and it led to him having a good, hard-working summer. It doesn’t have anything to do with his contract. It’s who he is.”