Congrats to SLAM’s Louder Than a Bomb columnist. Keep doing it big, Dave! As always, head to edgeofsports.com to read more of Dave’s work.

Sport in Society and the Northeastern University School of Journalism have selected Dave Zirin as the winner of this year’s Excellence in Sports Journalism in Print/Online Media. The award recognizes Zirin’s commitment to delineating the connection between politics and sports, his unwavering voice, and his oftentimes controversial stances. Zirin’s writing sparks innovative thinking regarding sports and politics and makes him a voice for all athletes.

Named one of the UTNE Reader’s “50 Visionaries Who Are Changing Our World,” Zirin writes about the politics of sports for the Nation Magazine. He is their first sports writer in 150 years of existence. Zirin is also the host of Sirius XM’s Edge of Sports and a columnist for SLAM Magazine and the Progressive.

His newest book, in collaboration with John Carlos, is The John Carlos Story, forthcoming from Haymarket Books in September 2011. Zirin’s prolific roster also includes: Bad Sports: How Owners are Ruining the Games We Love; A People’s History of Sports in the United States; Not Just A Game: Power, Politics and American Sports; Welcome to the Terrordome: The Pain, Politics, and Promise of Sports; What’s My Name, Fool? Sports and Resistance in the United States.

Zirin has brought his blend of sports and politics to multiple television programs including NBC, ESPN, MSNBC, CNN, Comcast Sports Network, C-SPAN, and Democracy Now! with Amy Goodman. He has also been on numerous national radio programs including National Public Radio’s Tell Me More, Talk of the Nation, and All Things Considered.

Zirin has debated FOX Sports president Ed Goren on college football’s Bowl Championship Series for National Public Radio, Bridgestone Firestone President Dan Adomitis in the pages of the Los Angeles Times on whether his company should be the “official tire of the Super Bowl” while in court for using child labor in Liberia, and the issue of steroids in sports with Jose Canseco and John Rocker. His writing has also appeared in Vibe Magazine, the Los Angeles Times, the Washington Post, the New York Daily News, New York Newsday, the Baltimore Sun, the Pittsburgh Courier, The Source, and numerous other publications.

Robert Lipsyte says of Zirin, “Some years ago I called Dave Zirin the best young sportswriter in America which I herby retract – now I think Dave’s combination of sustained outrage, lively prose, and love of the games, and a clear sense of right and wrong has made him, simply, the best sportswriter in America, no age discrimination attached.”

Paul Shirley: Not a Fan of Haiti (UPDATE) 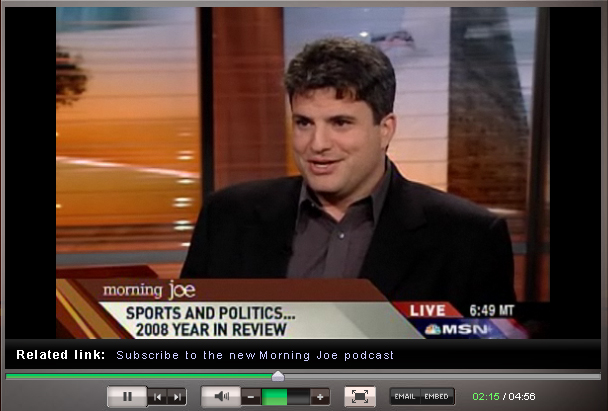