David Blatt Says Title Expectations for the Cavs are ‘Unfair’ 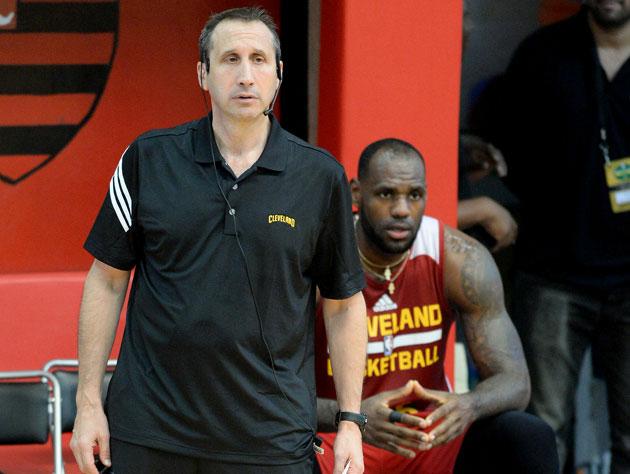 Cleveland Cavaliers head coach David Blatt is trying to manage expectations for his team, though it’s likely in vain.

Oddsmakers and most observers consider the Cavs the team to beat in the NBA this season, but Blatt insists that there are too many other great squads worthy of being in the conversation.

That being said, a team featuring LeBron James, Kevin Love and Kyrie Irving will have a very large target on its back.

“Anybody talking about us winning it all, I think they’re being unfair to those great NBA teams that are out there that have either won it or have been there to win it, and also to us as a team that’s talented but new,” Blatt said Tuesday, two days before the Cavs’ season opener Thursday at home against the New York Knicks. “We have a lot of work to do before we can start claiming anything before it’s time.”

According to the Westgate Las Vegas SuperBook, Cleveland has 5-2 odds to win it all, followed by the San Antonio Spurs (3-1), Oklahoma City Thunder (9-2), Chicago Bulls (6-1) and Los Angeles Clippers (8-1) rounding out the top five.

Just how close does Blatt think the Cavs are from being worthy of championship consideration? […] “We’re going to see,” Blatt said. “Obviously now that the real games are getting started, we’re going to find out. I thought we showed in preseason that we’re a pretty good, competitive group and we played some good teams. But, there’s a big difference between preseason and regular season — we all know that — for everyone. But we got the right kind of personalities and the right kind of character guys to certainly get out there and make an effort every night. We’re talking about being the best team that we can be and progressing day to day and hopefully putting ourselves in a position where we can compete with anyone.”