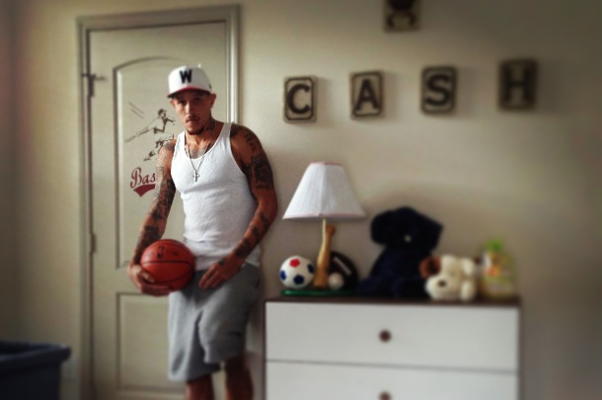 It’s the weekend of July 21, 2013, and Summer League is going strong in Las Vegas. There, deep in the desert city that is one day destined to host an NBA team, a plethora of unproven rookies and borderline veterans are playing like their careers depend on it.

Twelve hundred miles away in Dallas, in a multi-room apartment he shares with his pregnant wife, Delonte West alternatively works out anxiously and waits by his phone eagerly. He knows his eight-year NBA career hangs in the balance. And West knows, after being cut this past October 29 by the Dallas Mavericks for disciplinary reasons and sitting out the entire 2012-13 season, that he’s not ready for it to be over.

“I had tears in my eyes watching games this past year—not because I’m bipolar, but because I’m sitting at home and miss the game” West says. “When my agent calls, I’m going to be on the next flight. Not to be cocky, but some teams that are trying to win are one guard away, one guy that can make a couple great plays away from going to the Finals.

Yes, a lot of people do know that the 6-3 West has the skills to be on an NBA roster.

“He could definitely provide depth at guard for a contender,” says one NBA scout who asked to remain anonymous.

Those same people, though, also offer doubts. “Talent isn’t the question,” says the scout. “It comes down to whether or not he’s worth the potential off-court headache.”

And that’s why West, who has been avoiding the media as best as he can since his dismissal from the Mavericks, spoke with SLAM. It’s time, the native of the DMV says, to clear the air. It’s time, West hopes, to pave the way for his return.

Every fan knows the story.

The story of the guns, of the Can-Am Spyder and the arrest.

The story that made West’s bipolar disorder public knowledge. That resulted in a mere misdemeanor.

The story that West has spent the past four years trying to shake. That’s grown like a shadow at sunrise and now casts a giant question mark over him wherever he goes.

The story that West believes has done irreparable damage to his career.

“Before that, coaches and GMs, they said I was a tough, scrappy player. They wanted to go war with me on their side,” says West. “Everything after that incident became, ‘did he take his medicine?’ Oh, ‘he’s bipolar.’”

West isn’t, by his own admission, faultless. He’s quick to acknowledge mistakes made while a member of the Mavericks. He regrets the incident that took place with Gordon Hayward in Utah (“the Wet Willy thing gave a lot of ammunition”), and he understands that he pushed the envelope on Twitter (“I’ve got to leave the jokes and social media alone and walk a straight line”). Still, he says, there’s a double standard doting his name like an undeserved asterisk.

“All of a sudden the laughter is now coming from the mainstream,” continues West. “Everywhere I look, the joke is on me.”

He offers an example: “My son is due in a week,” begins West, a long-time father figure and financial caregiver to a large swathe of his extended family. “Everybody I know wants me to name my son Delonte Jr. I’m not, though. In today’s world, my son doesn’t need to go to school and get laughed at because of things his father did.”

Pointing to his career statistics (9.7 ppg, 3.6 apg) and high basketball IQ, West thinks he could be a valuable asset acquired at a clearance price.

“I watched the NBA all last year,” says West. “What I ended up saying to myself is, Let me stop playing around; let me get back on the path that I was on; let me get into my groove.”

What that means, he says, is that he’ll be fully focused on basketball, and that he’ll leave social media to other players and contract negotiations to his agent.

“When I get another chance, I’m going to put the blinders on,” vows West. “After this, I’m just breaking free of that stigma, letting stuff go, putting that stuff behind me. I’m going to show that I’ve grown, stats-wise and person-wise.”

He also points out, taking an optimistic stance, that last season—which saw him play eight games, all as a member of the Texas Legends of the D-League—and the previous injury-riddled two have served to preserve his youth.

Not just play this game, he corrects, but play it at a higher level than ever before.

“What I’m excited about is that I haven’t even scratched my prime,” says West. “Just give me a jersey.”

Give him a jersey and he’ll give you everything he’s got. After all, he’ll be playing for his name, for his namesake and for love.

“Basketball is all I’ve ever had,” offers West. “I won’t give the media any more excuses.”