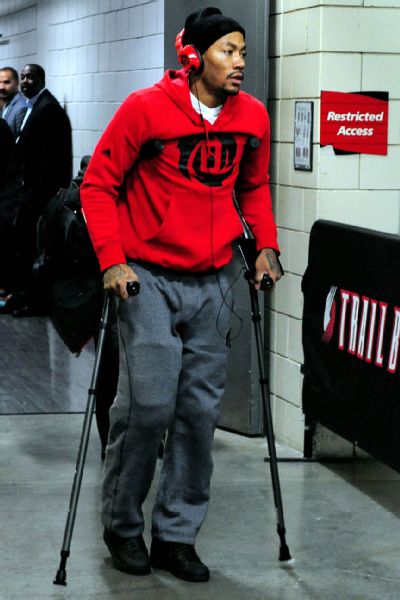 UPDATE: Derrick Rose has a torn medial meniscus in his right knee, and he’ll be out indefinitely after having surgery, according to the Chicago Tribune:

Per sources, Derrick Rose tore his right meniscus and will need surgery.

How could it happen again? Derrick Rose, who missed 18 months after reconstructive ACL surgery on his left knee in 2012, injured his right knee on a non-contact play in the third quarter of Friday’s game against the Blazers. Rose could not put weight on the leg, and the Bulls fear Rose may have torn his ACL, according to WGN Radio. Bulls players and fans can only hold their breathe as they await the results of Saturday’s MRI. We’ll keep you posted.

Bulls point guard Derrick Rose left the team’s bench and headed to the locker room during the third quarter of Friday’s game against the Trail Blazers after appearing to injure his right knee.

Rose initially exited the contest with 3:20 left in the period after executing a jump stop—the same maneuver on which he suffered his torn left ACL in April of 2012—and shortly thereafter checked out of the game.

On the sidelines, he was seen rubbing his right knee and removed the protective sleeve on it, then was assisted by the Bulls’ medical staff to the locker room, without being able to put pressure on his right leg.

The Bulls’ media-relations staff later confirmed it was a right-knee injury, which was not the knee the point guard had surgically repaired in May of 2012.