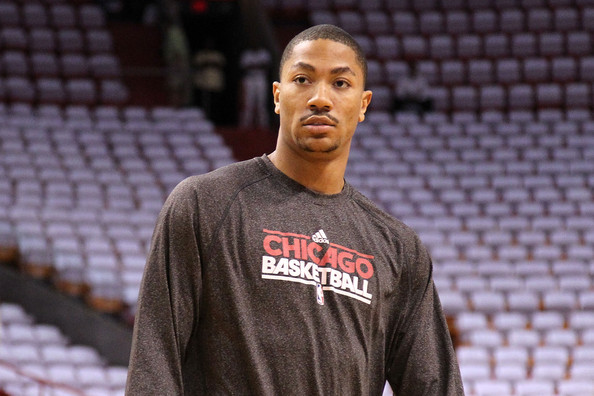 Well, well, well. So much for not helping the Chicago Bulls to recruit star free agents. Derrick Rose showed up for the big pitch to Carmelo Anthony, and even put in a workout (which was scheduled) to show ‘Melo that his body is ready. Per the Chicago Tribune and Basketball Insiders:

When Tom Thibodeau said Monday that “our players will be available to talk” regarding free-agency pitches, the Bulls coach wasn’t kidding. And (Taj) Gibson’s presence carries particular significance. Sources said both the Bulls and Anthony, should he choose Chicago, want to keep Gibson for a core that would significantly improve their chances for an Eastern Conference championship.

Barring the Knicks agreeing to engage in sign-and-trade talks, keeping Gibson and his $8 million salary would limit Anthony’s payday. Though sources have indicated the Bulls would be aggressive in making necessary moves if Anthony verbally committed, the Bulls would have to amnesty Carlos Boozer and trade Mike Dunleavy, Jimmy Butler and Anthony Randolph for a starting salary of $16.9 million.

While Rose had went on the record saying that he wasn’t going recruit Anthony to Chicago, he was very involved in the team’s courtship of the superstar free agent, according to sources close to the situation. While at the United Center, sources say that Rose went through a private workout to show Anthony that he’s healthy and ready to compete at a high level next season.

After meeting and discussing the team’s pitch, the group went to dinner at the Peninsula Hotel in downtown Chicago. Anthony, Noah, Gibson, Thibodeau, Jerry Reinsdorf, Gar Forman and Scottie Pippen were all in attendance at the dinner, according to sources. (Note: Rose wasn’t at the dinner, as previously reported. He left the group earlier in the day, but did interact with Anthony at the arena before and after his workout).The Bulls left the meeting and dinner feeling very confident that Anthony is seriously considering signing with Chicago, according to sources close to the situation.