Dikembe is a better person than YOU 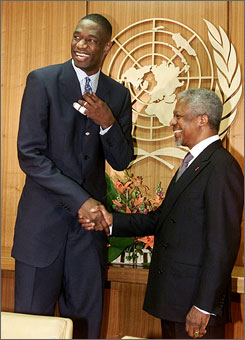 This has been a long-time coming, and was even mentioned in TIME magazine back in 2003. Dikembe Mutombo has donated FIFTEEN MILLION DOLLARS of his own money to build a hospital in Kinshasa, Congo, which finally opens on September 2nd. Now, when a person goes out of their way to do something as great and charitable as this, it’s tacky for them to draw attention to themselves and explain just how much they gave. So I’ll do it for him. According to basketball reference’s semi-accurate career earnings numbers, Dikembe has pulled in $110.7 million in NBA salary alone. Who knows what his portfolio looks like after endorsements, investments, interest, and other finances, but the fact remains that the man is putting A LOT of money in the right place. $15 million was what he made per year at the height of his earning potential. To scale that down to human sized revenue, the average American househould makes about $45K. This would be like working 10 years or so to build up savings of $500,000 – and that’s assuming you can save money like me – and then giving $40K in one pop. I don’t know about you, but to me that’s kind of a big deal. On top of all that, Dikembe has constantly been fundraising to get more money for the hospital, which is still $7 million short and has operating costs of over $2 million per year. So he’s not just saying “Look here’s my money, aren’t I the humanitarian of the century.”
Charles, you were saying something about helping poor people?