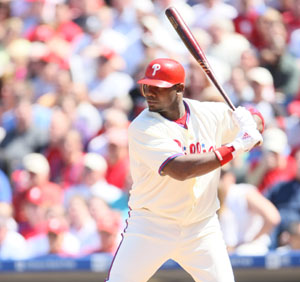 When SLAM readers think about a young superstar, sponsored by Adidas with the last name Howard, they’re likely conjuring up images of #12 down in Orlando.

But that billing also fits the big lefty from Philadelphia, Phillies first baseman Ryan Howard. Not only is he a former MVP, and the fastest major leaguer ever to 100 home runs, he’s also a huge basketball fan.

Before going out and belting the game winning home run against the Padres, Howard sat down with us at Citizens Bank Park to talk hoops.

SLAM: You played basketball in HighSchool, what was your game like then?
I mostly played small forward but also the 4, and 5 spot. I was about 6-2, 6-3 at the time and did a lot of banging down in the post.

SLAM: Do you still play?
Not as much as I used to, I definitely play pickup games here and there, but I kind of laid of it a little bit.

SLAM: Who are some players or teams you make a point of checking out when they’re in Philly?
Jimmy (Rollins) and I got a chance to watch Lebron and the Cavaliers when they were here. I’m a big Allen Iverson fan, but one guy I would love to go see play is Kevin Garnett.

SLAM: Did you checkout Iverson’s return to Philly this season?
No, we were out of town but, I definitely saw him play a lot when he was with the Sixers. I actually got a chance to meet him, which was really cool; he’s a real good guy.

SLAM: The Sixers were a bit of a surprise this year in the NBA…
That team played with a lot of heart. They had a lot of doubters coming into the season and they definitely proved a lot of people otherwise.

SLAM: Any playoff predictions?
Obviously the Spurs are the Spurs, but New Orleans is looking real good too. It’s tough to pick because it’s not necessarily about who has the best team on paper, but what team is playing the best at the time

SLAM: As a former MVP, if you had a vote for this years NBA MVP, who you got?
Man, that’s tough. For me, it comes down to Chris Paul and Kobe, but there’re so many different criteria you can look at, and I think both of them fit it well. If you took either guy out of their team’s lineup, how would that team do? If you took Kobe out of the Lakers lineup, they wouldn’t be where they are. If you took Chris Paul out of their lineup, same deal.

SLAM: How special is winning a MVP award?
It’s cool, but everybody plays the game to win a ring. Allen Iverson said it, and he has pretty much all the individual achievement awards possible, and they’re great, fine and dandy, but you play for the ring. The ring makes it complete.

SLAM: What NBA player best represents your game? I see you as an inside-outside guy.
I am but, if I were going to tailor my game after someone in the NBA it would be Kevin Garnett, with Kenyon Martin’s hops. I say that because. I played the post and I love the passion that KG brings to the game – he wears his heart on his sleeve every time he goes out of the floor.

Kenyon Martin just has that swagger when he dunks on someone. I got to watch him play when he was in college at Cincinnati, when they were playing in St. Louis, and I remember he was just a beast. Didn’t matter who you were, if you were in the way you were getting dunked on.

SLAM: Speaking of hops, how are your bunnies right now?
Mine right now are like Charles Barkley at the end of his career (laughs). Not young Charles where he was getting up there just ramming on folks, but it all depends how the legs feel.