Dirk Nowitzki: ‘It Was a Great Comeback for Us’ 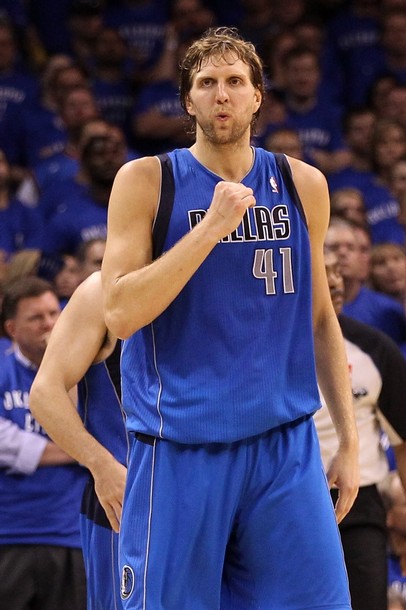 Dirk Nowitzki, Jason Kidd, late-game experience, and defense. Those four elements are the main reasons the Dallas Mavericks are now just one more victory away from returning to the NBA Finals.

The Mavs shocked the youthful OKC Thunder in Game 4 last night, deflating Kevin Durant and company with an incredible 15-point rally in the latter stages of the fourth quarter.

For Dirk — who scored 40 points on an array of unreal jump shots — it was one of the Playoff highs of his historic career.

The Mavericks rallied from a 15-point deficicit in the final five minutes, using a 17-2 run to close the period and force overtime. Forward Dirk Nowitzki said it was simply the greatest comeback he’s been a part of in all of his years with the Mavericks. “I’ve obviously had my fair share of leads and lost them,” Nowitzki said. “It was a great comeback for us, definitely one of the best that I can remember being a Maverick, definitely in a very important game.”

Said guard Jason Kidd: “I have been on the other side when we have given up leads. Those are easy to remember, when you give up a big lead and lose a game you felt you should have won. We kept playing and kept believing.” Center Tyson Chandler said “It happened to us in Portland. I don’t know if I have been on the good end of it. But it was huge for us just to believe we could come back. We never gave up at any point.”

Should the Mavs close out the Thunder in Game 5 on Wednesday night, they’ll have a few days off to rest their weary bodies prior to the start of the championship round.

Does OKC have any belief left after last night’s collapse, can they push the series back to a sixth game? Tough questions to answer for a young squad traversing through treacherous Playoff territory.