Doc Rivers Calls Out the LA Clippers for Lacking Heart 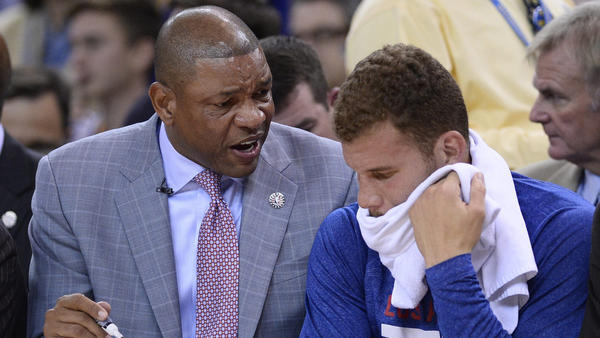 Following a 121-104 drubbing on the road Wednesday night at the hands of the red-hot Golden State Warriors, LA Clippers head coach Doc Rivers let his players “blow smoke up each other’s asses”.

Rivers then proceeded to rip them during his postgame chat with reporters.

Chris Paul has talked about the Clippers needing to develop a “killer mentality” this early in the season; Doc would simply like them to show up and compete.

“Tonight was great in the aspect, I kind of said, ‘Something’s going to happen tonight. It’s going to be good or bad for us. We’re going to find out exactly what we need to find out.’ And what we found is that they’re way better than us right now. It’s not even … if this was a playoff series, we’d lose in four games. It would be a destruction.

From our standpoint, I’ve got to do a better job. I told the guys that. This is not their fault. I’ve got to figure it out. I’ve never been in a game where a team scores 65 points and we have one foul. That, to the core of me, bothers me to no end. I mean, I’ve never seen that before. And I think the foul was late, and it was a mistake. It probably wasn’t a foul. For me, I’m doing something wrong because that’s as soft as you can probably get in a game. One foul? At halftime? Are you (expletive) kidding me? That’s as bad as I’ve seen. Forget what we’ve got to fix. That, over anything, tells me we weren’t competitive.”

“We’ve got to rebound better, clearly. [Blake Griffin] has to rebound better. Our guys have to give him room. There was no space today. Listen, Blake is a great player, but if we give him no space, no room, there’s no ball movement, there’s no people movement and there’s no hard cuts, you can guard Blake. The way we moved on the floor tonight…Were we tired? We may have been. Was it five games in seven nights? But what we lacked was heart. I don’t mind being tired, and we can use that as an excuse, but listen, I just know me. If I’m tired and getting my butt kicked, I’m going to leave the game with no fouls left. That, to me, was just weak on our part. I’ve got to do something better. Alright? We have holes on our team, I know that. But, we should be covering up for them. I don’t think we’re doing a very good job. We’re leaving the guys that aren’t good defenders on an island instead of being there to help them. Right now, this is not the same group from last year. And it’s the same group. So, we have to figure that out.”