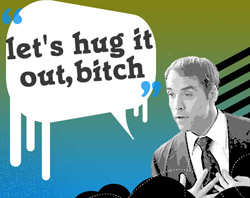 If you don’t watch HBO’s Entourage, this spiel will make very little sense. Though the case could be made that if you don’t watch Entourage something is seriously wrong with you. However, HBO isn’t a guarantee in life, so that logic flies by the wayside.

In this week’s episode, Vinny Chase & crew head to Vegas. While the other four hit the blackjack tables and hang out with strippers, Johnny Drama spends most of his time awkwardly flattering his masseuse, Ken—awkward for Ken, typical kiss-assery from Drama. Assuming Drama wants something he doesn’t, Ken decides to “play for the other team” with Drama because he is so enchanted by the obsessive flattery. Or so he says.

Drama isn’t cognizant of the fact that Ken thinks he’s hitting on him. The two men—a former NFL 2nd round draft pick turned masseuse and an out-of-work actor that mooches off of his younger brother’s fame—end up in Drama’s hotel room. Ken proceeds to prepare for what he assumes is the inevitable while Drama goes searching for lotion.

When Drama finally realizes what’s going on, he incredulously spits the line, “What the fuck are you DOING, Ken?”

It’s not the context or the line that’s classic. It’s the way Kevin Dillon (Matt Dillon’s brother) delivers it that makes it a classic moment in TV history. Dillon says the line in such a pretentious yet naïve way that he completely breaks character. It’s horrible and awesome all in the same moment. Dillon’s pretentiousness comes from basically acknowledging what anyone who had watched the first 20 minutes of the episode could already see coming.
The funny thing is that Johnny Drama’s naiveté makes breaking character acceptable (and therefore brilliant) because Dillon plays off of this by acknowledging—accidentally?— that he knows what the viewers know. More importantly, in the process he becomes a caricature of himself.

Keeping all that rambling in mind, I present to you the top 5 “What the fuck are you DOING, Ken?” moments of the past few months in the NBA.

The horrible: Tim Thomas resurrected; Suns go farther in the playoffs (literally) than the Spurs.
The awesome: Nash defies convention; Mike D’Antoni is a genius.
The caricature: “A center, what’s a center? Let’s throw four guards and Boris Diaw out there.”

4) The non-existent foul called on Dirk that gift wraps the Heat game 5, and probably the series.

3) The elimination of Gilbert Arenas.

The horrible: The missed free throws after LeBron’s brief but overanalyzed trash talk.
The awesome: The 40 footer he drilled only a few moments prior.
The caricature: Arenas says he needs to put himself in free throw detox and then gets in trouble with Miami cops for trying to help Awvee Storey. The unsubstantiated police report claims that Arenas said, “I’m not going to leave my teammate.” This is why Gilbert Arenas should run for president. If Awvee Storey is a teammate he’ll stand up for, imagine what Gilbert Arenas can do for YOU.

The horrible: Media backlash.
The awesome: Kobe finds himself caught himself in the midst of a damningly controversial double edged sword but manages to do his best to not seem like he’s being crucified.
The caricature: Kobe is again in the public eye for caring about his image, except this time it actually makes sense.

1) Eddie Griffin’s “Knowledge of Self”

The horrible: Don’t ____ and drive.
The awesome: The number of jokes you can make about this.
The caricature: From Eddie Griffin’s wikipedia page. “Police eventually did arrive, however, but allegedly did not require Griffin to submit to a breathalyzer test or field sobriety test. An investigation is underway to determine if the officers violated standard protocol in light of Griffin’s celebrity status.”