Dwight Howard Looking to ‘Start Own Path’ in Orlando 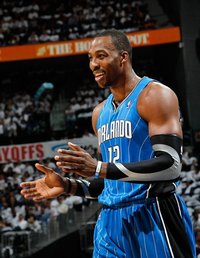 There’s a general assumption out there that Dwight Howard’s Orlando days are numbered, that he will inevitably flee for greener, bigger pastures once he becomes a free agent next summer (or perhaps even sooner, should the Magic’s front-office feel they have no chance at re-signing him to a longterm deal.)

It’s not just a media or fan-created assumption either; Dwight Howard himself has occasionally helped feed into it.

According to the big fella, though, he’s not thinking about leaving Orlando. In fact, he’s looking to build something special with the Magic, but he needs them to step up, too.

“I’m not trying to run behind nobody like Shaq or be behind somebody else,” Howard said, referencing Shaquille O’Neal’s decision to leave the Magic following the 1995-96 season and sign with the Los Angeles Lakers. “I want to start my own path and I want people to follow my path and not just follow somebody else’s path. I want to have my own path, and I want to start that here in Orlando. But I can’t do it alone. Not only do I need the right teammates, but I need the city behind me. That’s the only way it’s going to get done. We can change this small city that we have — this small market that we have — and we can make it a big market.

“As of right now, I’m a part of the Orlando Magic and I plan to be here,” Howard said. “And I want the Magic to do whatever they can to make sure that we can get our city behind us. That’s the only thing that I want to happen: just to have the city behind me and the support of our fans. I never said I was leaving. I never, ever thought about leaving. That’s basically where my head is right now. I never said anything to them [the Magic] about what my plans were because that’s not what I’m focused on right now.”

Heading into next season, no front-office is under greater pressure than Magic GM Otis Smith and his staff. Their franchise player has issued them a challenge to get him better teammates and greater fan and city-wide support.

Though Dwight Howard and his reps say they want to stay in Orlando for the long haul, it wouldn’t be wise to assume that the rumors about him leaving will now subside.