End of an Era in San Antonio 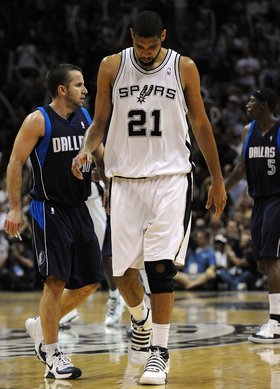 The Dallas Mavericks were the better team, no one could argue this — least of all, their postseason opponent. But what they pulled off in San Antonio last night is remarkable nonetheless.

For the first time in nearly a decade, Tim Duncan’s Spurs failed to advance past the first round of the Playoffs.

From that fateful day in April when routine soreness in Manu Ginobili’s right ankle became an unexpected stress fracture, the Spurs knew their chances at a championship had also been broken. They knew everything else in this postseason would be infinitely more difficult, too.

“We came into the series not saying ‘poor us’ or whatever,” Tim Duncan said. “We came into the series thinking we have a chance, and we can win it.” That belief officially became an unattainable dream Tuesday night, when the Dallas Mavericks rolled to a 106-93 victory in Game 5, claiming the first-round series 4-1 and sending the Spurs off on their earliest vacation in nine years.

With the way Dallas had played, perhaps the Spurs still wouldn’t have had the firepower even had Ginobili been in uniform. “Even with Manu, it would be tough to beat Dallas,” Parker said.

It’ll be a long summer in San Antonio, but above all else, an opportunity for the organization to retool. And remember, they’ve been down this road before.