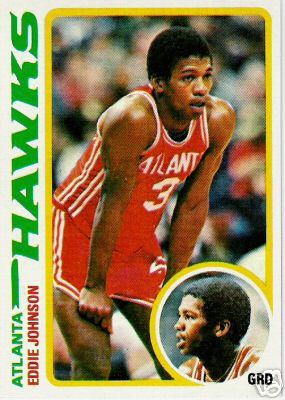 I must have been in sixth or seventh grade. Spud Webb was a rookie on the Hawks, and I decided that he was going to be my favorite player that season. I’d seen him play some while he was on NC State, and I knew he was small and explosive, and when you’re small you have to find someone like that to identify with.

My Mom was teaching at a preschool near our house, and one day early in the year she came home and told me that the daughter of Hawks guard “Fast” Eddie Johnson was in her class. As the year went on, Johnson came by occasionally to pick his daughter up, and my Mom asked if I wanted his autograph. I didn’t, but I wanted to meet Spud Webb. Eddie hooked it up, and the next time I went down to the Omni to see a game, I met Eddie near the floor during warmups and he introduced me to Spud. I still have a photo of the moment at my parent’s house.

I’m not bringing this up because I’m feeling nostalgic or anything. I’m bringing it up because last night in Florida, Eddie Johnson was arrested and charged with sexually assaulting an 8-year-old girl. According to the story, Eddie’s been in and out of trouble and, since 1989, has been charged with a dizzying array of offenses: burglary, battery, robbery, marijuana possession, possession of drug paraphernalia and resisting arrest, battery on a law enforcement officer and resisting or obstructing an officer without violence.

I’m not old enough to remember Eddie much as a player, but he was a two-time All-Star who played a decade in the League. Of course, this was during the late ’70s, when NBA locker rooms allegedly looked like party scenes from Scarface. There was an amazing story a few years ago in the AJC about the Hawks in the ’80s, and the writer visited Eddie Johnson in a Florida jail, where he was serving time for one of those myriad offenses. In that article, which I’ve been trying in vain to find online for the last 20 minutes, Mike Fratello had some ridiculous tales of coaching Fast Eddie, including the time he showed up for a team meeting with an ice cream cone that was dripping all over the locker room, and how he’d light up cigarettes during training camp.

Of course, EJ is innocent until proven guilty, and hopefully he didn’t do this horrible thing. I don’t know what the final lesson is here, other than the obvious, and other than sometimes not everyone that we look up to is who we think they are.