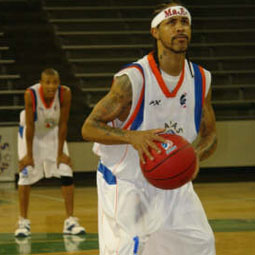 Slamonline’s got a new blogger—Matt Caputo. Matt, who works down the hall from us at KING Magazine and has already done several pieces for the site, loves all levels of the game but is determined to diversify Slamonline’s efforts. The NBA stuff is great, he admits, but Matt’s going to be looking a little deeper for his stories. Here’s his first:

While helping players live their pro hoops dreams, the Mayas-USA, a visiting member of the minor-league World Basketball Association (motto: “The Next Best Thing to the NBA”) are extending their own dreams. The Mayas, or Mayas de Yucatan, are a club originally from the L.N.B.P., or the Liga Nacional Balonceste Professional, Mexico’s top pro-league. As they quietly make their way into the WBA’s championship game, their ultimate goal is to remain in America and join the NBA D-league.

“I wasn’t going to ever, ever, come back to the WBA, because there’s nothing for me to prove in the WBA, but I came here for the Mexican fans and the Mexican organization,” says Baltimore native and former JuCo All-American Daryl “Majic” Dorsey, recently announced as the MVP of the WBA for the second time. Dorsey spent last summer playing for the Mayas in Mexico and became their most well-known player. “They got the TV deal basically because of me. They basically got in the WBA because of me. I played this year because they were loyal to me and because it’s only a month’s worth of basketball. I’d like to see them get a team in the Developmental League.”

Founded by five brothers (Jorge, Luis, Carlos, Marco and Ariel Flota) in ’99, the Mayas organization has made a steady progression from local club to national, and now international levels of competition. In 2006, the Mayas joined the LNBP and made a quick impact as they became the first expansion team ever to make it to the league’s playoffs. While they didn’t make it far, it validated the Mayas franchise and set team’s owners plans for the team’s future into motion. The Mayas decided to move north for a test-run in an American pro league and to have better access to NBA league officials. The eight-team WBA, which is centered down South and has a short, May-June season, features teams are made up of 10 players with five years of professional experience or less (and two players who are more experienced). Golden State Warrior Josh Powell, who went undrafted out of N.C. State, is the only WBA player to graduate into the NBA to date. The Mayas are hoping to be the next members of the WBA to get a shot at the league—the D-League that is. “Their main goal of everyone in this organization is to get an NBA developmental team,” Dorsey [pictured] says of his current employers. “For people in Mexico, the WBA is the NBA. We’re in the newspapers everyday, all our games are on TV there, the media comes from Mexico like seven or eight people at a time just to come here to see a WBA game. They’re taking it real serious.”

Since joining the rag-tag WBA, the Mayas have rested easy atop the West Division. Based in Longview, TX, the Mayas play their home games at Longview High School Stadium. Though they only average about 100 fans each game, the Mayas games are broadcast back to Mexico, making them one of the few minor-league basketball teams with regular television coverage. “Basketball is becoming very popular in Mexico right now,” says Marco Antonio Flota, one-fifth of the Mayas family ownership firm. “America is such a great country for basketball and because of that our organization can be seen doing great things.”

Before the Mayas, Mexican basketball hadn’t done so well in the US. The Atlanta Hawks drafted Manual “The Flying Mexican” Raga in the 10th round of the 1970 draft, and made him the first Mexican player drafted into the NBA. However, Raga was never signed because the Hawks wouldn’t pay $35,000 to buy out his contract from the Italian league. During the 1994-’95 season, the Mexico City Aztecas played in the C.B.A, but quickly moved to San Diego at season’s end. Playing for the Phoenix Suns, Horacio Llamas became the first Mexican-born player to play in an NBA game in March of ’97. After two 10-day contracts, Llamas signed to the Suns for the remainder of the year. Soon after Llamas, a seven-footer, suffered foot and Achilles tendon injuries and hasn’t played in the NBA since the ’97-98 season. The Tijuana Dragons have been in the ABA since 2003, but other than appearances from Dennis Rodman, Anthony “Pig” Miller and player/coach Acie Earl, they have remained under the radar. Mexico’s biggest basketball star, and only player currently in the NBA, is Eduardo Najera, who has played in the League for the last seven seasons. Mexican-American referee Tony Nunez spent 30-years calling games in the NBA. Today, the Mayas are trying to secure their own place in Mexican hoops history.

“People in America have had a great interest in the Mayas and our organization,” says Carlos Flota, who serves as the Mayas President. “There has been no pressure for us as the owners of the team because it’s has been our goal to be a part of the best basketball in the world.”

“I’ve never been a part of a situation where the owners have been so great to their players,” says Mayas seven-footer Reo Logan, who has played in South America and China since finishing his college ball at Georgia State. “It makes the guys on the team want to play harder for the owners.”

When the WBA season comes to an end in a few weeks, the Mayas dream of joining the D-league and becoming a permanent part of American basketball will continue. As the NBA becomes increasingly diverse, it’s not unrealistic to imagine the NBA adding a team in Mexico in the future. For now, the hopes of die-hard Mexican hoop fans rest on the shoulders of five brothers.

“Before their anything else, they have a first love for basketball, they are basketball guys, they have been involved in pro sports in Mexico for 8 years. This is just an evolution of them,” says Mayas Head Coach Linoell Garrett. “Coming to the United States was a long-time goal and it was a very historical event that a lot of people are very proud of. So now we’re just trying to continue to grow in the US as a basketball organization.”