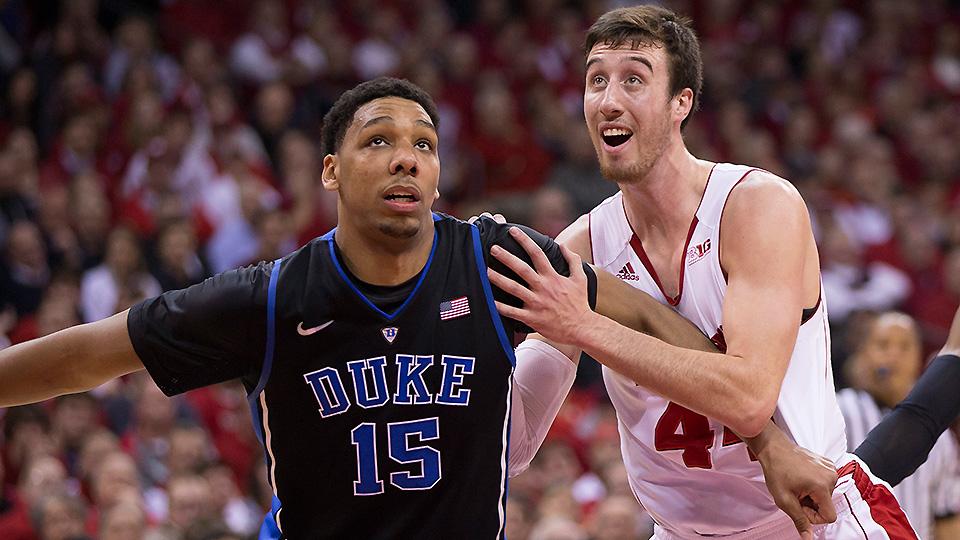 The Associated Press honored the five best players in college basketball with its All-American Team earlier today. Here is the squad:

Kaminsky was the only unanimous first-team selection. He is arguably the best college basketball player in America, as he has carried the Badgers’ offense—which is the most efficient offense in the country—all year. The senior is averaging 18.7 points, 8.0 rebounds, 2.7 assists and 1.5 blocks per game, and is one of the main reasons that Wisconsin won both the Big Ten regular season and postseason championships.

Surprisingly, Okafor was not a unanimous selection, as he was left off of one voter’s first-team squad. Okafor has carried Duke this year, as he is averaging 17.5 points, 8.7 rebounds and 1.4 blocks a night for the Blue Devils.  Not only is Okafor a national player of the year contender, but Duke’s star freshman could end up being the No. 1 pick in the upcoming NBA Draft.

Kentucky’s only player on the team is its defensive anchor, Cauley-Stein. While he doesn’t have the gaudy numbers that the other four players on this squad possess—he’s only averaging 9.1 points, 6.5 rebounds and 1.7 blocks per game—he’s been a crucial part of what the Wildcats have wanted to do on both ends of the court all year. He’s also played more than any Kentucky player this year, as he’s averaging 25.8 minutes per night.

While neither Grant nor Russell will play in this year’s Final Four, both were spectacular throughout the 2014-15 season. Both were the primary playmakers for their squads this year, and while Russell had the leg up in scoring and rebounding, Grant averaged more assists and steals. Both are expected to head to the NBA—Grant is a senior, while Russell is expected to declare for the Draft—and both guys are projected first-round picks.