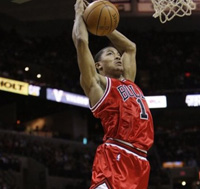 Webster’s Dictionary defines the word ‘Go’ in several different ways. Here’s a couple definitions that relate directly to me and what SLAMonline’s newest basketball blog penned by yours truly will represent:

As a Chicagoan, I can identify with both of these meanings because they embody the heartbeat of this city and its residents perfectly. The first describes the aggressiveness Chicagoans possess, sometimes at the expense of common sense. The second can be linked to the Midwestern sensibilities that exist here to go along with a touch of arrogance that’s masked as confidence and is oftentimes too subtle to even notice.

Both of those meanings describe the way the game of basketball is played in this town too. The next time you watch Derrick Rose or Dwyane Wade go hard to the basket with no regard for who’s in the paint, finish the play, pick themselves up off the floor, and then turn around and do it again, and again, and again, you’ll see what I mean. This city taught them to play that way. Taught them to have no fear.

People from this town are go-getters too. If we see something we want, we aren’t afraid of going after it by any means necessary. That’s how I came to SLAMonline. We also don’t allow ourselves to think about consequences, we’ll worry about that later. Instead, we choose to focus on our supreme confidence in ourselves and in our abilities and we’re able to keep it all in check so that we’re seen as being humble, and not cocky, or arrogant.

So whether it’s me writing about Vince Carter and taking shots at the city of Toronto; or the time I let the cat out of the bag and wrote about DeMar DeRozan being in the Dunk Contest before it became “official” and then having Raptor’s PR demand I remove the entire paragraph from my article; or me engaging in “spirited” but civil conversations with commenters on this site or people on Twitter about this game of ours even though in the back of mind, I probably feel like I know more than they do anyway. This town has shaped me into that. We push things to the limit here. I don’t mean to offend or piss anybody off, but that’s just who I am. That’s the way Chicago made me.

Finally, most people don’t know this but “The Go” is another nickname for Chicago. Everybody’s heard of it being called the Windy City and Chi-Town before, but if you’re not from here or up on Chicago slang like that then you wouldn’t know about that one. You’ve heard it before though. Problem is, it probably went completely unnoticed and over your head when you did.

“I put on everybody that I knew from The Go,”

That’s a line from Kanye West’s verse in “Put On.” Yes, he was referring to Chicago when he rapped that. The name isn’t as mainstream or as commonly known as the others, but it’s not for everybody to use anyway. It comes from the streets. That’s who it’s for, and outside of Kanye rapping about it to the world, the streets of Chicago is the place where you would’ve had to go to hear it being used. Until now.

So add it all up and what do you have? You have a basketball blog being penned by someone who is always looking for a way to push the envelope between responsible journalism and just flat out writing from left field and who isn’t afraid to do so, combined with a healthy respect for everyone’s opinions while not giving a damn at the same time. But more than that, I hope this blog will be yet another source of pride not only for SLAMonline, but for the people of Chicago who like to read about basketball and who love this game of ours. I write just as much for them as I do for myself.

I put on for my city.