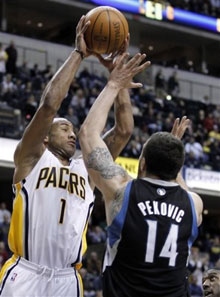 – After two offensive rebounds Mike Dunleavy began his first quarter assault on the Minnesota Timberwolves with a trey from the right side of the arc. He converted his first four attempts from the field (including three triples), good for 14 out of his team’s first 16 points and helping the Pacers to a quick 7-point cushion early, 16-9.

– Minnesota’s shot selection to start the game has been poor. Their lack of clock usage on the offensive end doesn’t help their cause on the defensive end and is a major reason that they are last in the NBA in points allowed per game.

– Lance Stephenson strolls out onto the court to congratulate his teammates at their first timeout of the half. When will we get to see him finally in action on the court.

– Love converted after he slithered between defenders on his way from the left wing into the painted area. A soft, in rhythm floater was the weapon of choice to score his first points of the evening and keep the T-Wolves in the game. 18-11, Pacers with6:24 left.

– Love with a baseline jumper, which was promptly answered by an elbow jumper by Danny Granger at the other end. 24-16 Pacers.

– Darren Collison bails out his team’s lack of motion on offense during this particular possession with a tough lefty floater around a few defenders in the lane.

– After a few Sebastian Telfair free throws re-extended the T-Wolves lead to three, Paul George knocked down a three-pointer as he fell out of bounds on the left side at the buzzer. Nice feed from Josh McRoberts, who had a quiet yet effective first quarter (+11 with him on the court).

– Paul George continues to show his expanding confidence and offensive repertoire, this time with a well executed pump-fake and jumper from the free-throw line.

– Tyler Hansbrough with three straight buckets. Indiana and Minnesota are wrestling for the lead in this high scoring affair, which is now tilted 40-39 in Minnesota’s favor with 8:20 to go in the period.

– Lazar Hayward with a nice cut to the basket off of a screen for an easy deuce, his ninth point on 3-5 shooting in the game thus far.

– Kevin Love with an unreal hustle play on the offensive glass. He caught the ball in mid-air, turned, and threw it off the leg of an Indiana player to retain possession. That’s why he’s a double-double machine and is leading the L in rebounding.

– Danny Granger with a tap-in off of an errant Collison floater gives the home team a 50-46 lead. Indiana lacks a presence on the offensive glass and Granger should be there more.

– Hayward with a strong baseline drive, finish, and-1 on the right side, cutting the Pacers lead in half.

– First Hayward made a good read on a Granger post move, then Granger blocked a free-throw line pull-up by Johnny Flynn from behind at the other end and converted after running the floor hard at the other end.

– After corralling an off-the-mark Collison pass Josh McRoberts gathered himself and finished on the other side. The T-Wolves head into halftime with a two-point advantage, 58-56.

– At the 8:42 mark Kevin Love is on the receiving end of a cross-court bounce pass from half court by Johnny Flynn. He got to the line for two, but this play showed that despite his presence on the boards, he still isn’t a high flyer.

– Johnny Flynn irresponsibly bobbled the ball as he brought it up court, leading to a Collison steal at mid-court. He then tossed the ball to George in the left corner, who hit a streaking Josh McRoberts for a dunk. Winning play right there.

– Paul George blew by three defenders and finished a hanging/falling lefty layup while getting fouled (though the refs missed it). Another tough play by the promising young rookie. 69-65, T-Wolves advantage.

-In the following two possessions, George threw another no look pass to McRoberts for a nice two handed slam then drove through the entire T-Wolves team again for another bucket. Now we’re really starting see why Larry Bird claimed he needed to see George on the floor more…

– A Kevin Love rebound at the 6:41 mark gives him his 39th consecutive double-double this season…Yea, we think he has a magnet attached to his hands and to the ball, too.

– A Danny Granger and-1 is answered by a Kevin Love triple. The T-Wolves continue to hold onto a narrow margin, 78-74.

– Kosta Koufos is playing with poise in the paint tonight for Minnesota. He just backed Hibbert down and converted a nice jump hook in the middle of the paint.

– After a Jeff Foster tap-in and Hansbrough jumper brought the deficit to two points, Wayne Ellington and Anthony Tolliver knocked down a deep two and a three from similar locations to keep the lead in ‘Sota in control 90-83 heading into the fourth.

– AJ Price and Dahntay Jones are taking over early in the period. Price has and Jones have 8 points in the first five minutes of the period. Talk about a necessary burst of life by two unexpected guys… Pacers have the lead now 101-98.

– Jones hit a free throw, had a nice lay-in through traffic, and then knocked an in-rhythm trey from the left corner, boosting the lead to 107-103. All 14 of his points have come in this 8 minute window in the fourth.

– Josh McRoberts told Kevin Love “This is my house!” with a powerful rejection. Not exactly Dikembe Mutumbo, but powerful nonetheless.

– The Dahntay Jones Show keeps rolling with yet another triple. What an impressive, takeover effort for a guy who had barely gotten any playing time before former Coach Jim O’Brien got the axe. 110-103, Pacers in firm control with 2:25 to go.

– Kevin Love discusses Dahntay Jones’ fourth quarter eruption: “Anybody can go off in this League at any certain time and he had the hot hand tonight. We did some different things–we put Lazar Hayward and Corey Brewer on him but he just kept knocking down shots and he played out of his mind.”

– Kevin Love on the double-double streak: “As far as the streak goes, just gotta keep on grinding and grinding out wins and good things will happen…Its not something I think about. If I thought about it I think it would affect my game. I’d be looking, asking what the stats were. So I just let the game play out and go from there.”

– Dahntay Jones explains his mindset during his fourth quarter eruption: “In the fourth AJ Price gave us a boost with a few buckets and a lot of energy. We had a break down in the post and he wanted me to get down there and I made the bucket so he wanted me to go back to the post, so I went there and we got rolling from an inside-out attack and we just started making the right pass to people who were open.”