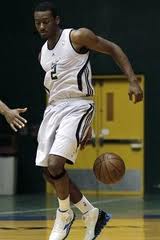 Vegas? Yep, Vegas. I’m back in Sin City — flew out mad early this morning, to get as close as I can to some NBA action. With players locked out and unions organizing and arguing with owners, it’s been a tough summer for us NBA fans, from the lack of summer league to the postponement of the free agency circus. Instead we’re just inundated with rumors about dense things like BRI and hard caps and things most fans don’t really care about.

I’ve filled my time this summer doing a lot of other random things, from doing some writing for the New York Times to watching A LOT of daytime TV. I need noise in the background while I’m working. Before I moved to New York, when I lived in Atlanta, I freelanced full-time, and I used to work from home. I don’t recall my exact TV playlist, but I believe it revolved heavily around daytime talk shows — Springer, Sally Jesse, Judge Judy. I didn’t really watch them, except for Springer, which at the time was just about the greatest thing ever on television. (Once the band GWAR was on Springer, and Jerry interviewed a female band member. My roommate Matt saw this and told me the woman’s name was Seamstress Hymen, which made us laugh. We later found out that her name was actually Slymestra Hymen. Same difference, I suppose.)

These days I try to avoid talk shows. I wake up and watch the local morning news, then around 10 or so shift over to a movie, one I’ve seen before so it won’t distract me, and there won’t be commercials. Then, around 1:00 p.m., after I make myself lunch, I go to Discovery for a daily four-hour block of American Chopper reruns. I’ve never driven a motorcycle, never build anything mechanical in my life, but I love watching American Chopper, which is a great mix of guys trying to find engineering and design solutions while screaming at each other and destroying their offices and cars. It’s a pretty brilliant combination, and now that I’ve seen every episode at least once, the show has become great background noise for working. Not sure what I’ll do when Discovery eventually juggles their schedule.

Enough! Anyway, woke up in NYC this a.m. at 4:30, busted to the airport, took a five and a half hour flight to Vegas (worked the entire time, even if some of that time was spent writing about American Chopper). Landed in Vegas at 9:30, picked up my rental car and went to my hotel wanting nothing more than to get some sleep. But there wasn’t a room ready, so I wandered around the hotel for three hours, dragging my rolling suitcase behind me, and finally got into my room for an hour before I had to run over to Impact Basketball for their Competitive Training Series.

There were three games scheduled for today, at 1:30, then at 3:30, then at 5:30. Organized by Joe Abunassar, a lot of NBA players have showed up over the last few days to get some run in. When word started circulating about these games, there was thought that a lot of people would turn out in search of basketball action. Well, the crowds weren’t huge, which wasn’t that surprising considering the games are being played on weekdays in a non-NBA city. Still, with so many guys on tap, I jumped at the chance to come out.

Impact Basketball is in a huge gym complex. The basketball court is just one area, as there’s maybe a 30-foot rock climbing wall around the corner, a baseball field in the back, even a go-kart track somewhere. The court is sunken, with bleacher seating for a few hundred people.

There were three games today. I’m doing a feature on this in the next SLAM, so I can’t empty the notebook here, but here’s a few things I noticed today…

First game is green against white. The teams were:

Biggest moment early was when Brewer, who was scoring like crazy to begin, tried to bang on Jordan Williams. Didn’t get him, and got fouled instead. That was one of the few fouls the refs called early on.

Rudy Gay had been cleared to play yesterday, after sitting out forever recovering from his shoulder injury. He looked good, in shape but a little rusty. Brewer drove and scored early, and Gay inbounded the ball off Brewer’s back and brought the ball up the court.

Not many big guys here, so the bigs who might play 4 or so in the NBA, are playing the 5 throughout.

Jerome Williams (a.k.a. JYD) was in the house, coaching in Prada sneakers.

Selby doesn’t lack for confidence — he was pulling up from everywhere and burying jumpers.

Rudy drives the lane and goes up for a jumper and gets grabbed, turnover. Turns to ref: “So if grabs my arm that’s part of the ball too?”

Corey Brewer tried to catch and drive around Dahntay Jones, then double-dribbled and went around him. Everyone screamed for a walk, which was eventually called, and instead of arguing Brewer just busted up laughing.

If you needed a reminder that this is all fun and games with something serious behind it, at one point Josh Selby got poked in the eye someone and went down holding his face, and everyone froze and you could hear a pin drop. Selby was fine, back on his feet just seconds later, but it was a sobering reminder that as hard as everyone was playing, nobody wanted to hurt anyone else.

With 8 seconds left and the white team ahead, the refs just ended the game. Talk to OJ for a while afterward, and he was in good spirits. Said he’d been working out in L.A. but came out to Vegas to get some run with the other Grizzlies when he heard about the games.

When the PA guy announced lineups, they still weren’t sure what number Samuels was going to wear, so he said “Samuels…number to be determined!”

I actually found myself enjoying how laid back everything was. When this game started, Coby Karl continued warming up on side while game was going on.

Travis Leslie went up to catch an oop and ran into Austin Daye on the way up. One of the refs gave Leslie two shots, and four guys from black team surround the ref to argue. Eventually the other refs had to blow the whistle to get guys to line up for the free throws. No T’s called, which is great.

From somewhere else in the workout facility, Kanye’s “Can’t Tell Me Nothin’” started playing. I asked my main man Michael Lee if we were in “The Hangover.” I wondered if I should ask someone, “Is this gym pager friendly?”

White team went small with Bledsoe/Mo Williams/Bassy all at once, and the black team went on a run. So much for that idea.

Black up 29-28 after one. Second quarter started with white team with 6 players on court. Black team, who were taking this all very seriously, started screaming, “That’s a tech! That’s a tech!” One of the red team players trots off the court, and the refs make no call.

Game much more physical than the first…lots of fouls, slapping at the ball. Also taking a while because Corey Maggette can’t stop running into people and stopping the clock.

Mo Speights and Hickson must love playing this game — they’re the only two dudes over 6-7, so they’re dunking at will.

Jared Dudley gets hot and starts knocking in jumpers from everywhere. Black up 67-50. Jared Dudley catches an oop on the break and runs down the sidelines high-fiving people. He would later say that was the first alley-oop he’d caught in a game since high school.

Hughes lead a break and missed Speights on his left. On the way back down, Hughes apologized to Speights: “Talk to me, talk to me! Say my name!”

The second half wasn’t close. J-Dudley finished with 31 and 10, 13 for 15 from floor. The PA announcer said Dudley was the player of the game, and Dudley ran over and grabbed the mic and said, “Just want to thank God, without him none of this would have been possible.” 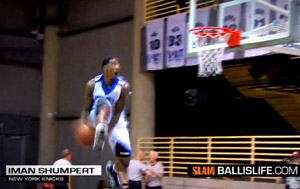 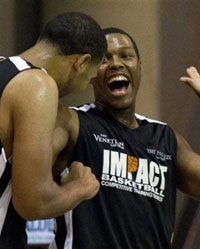 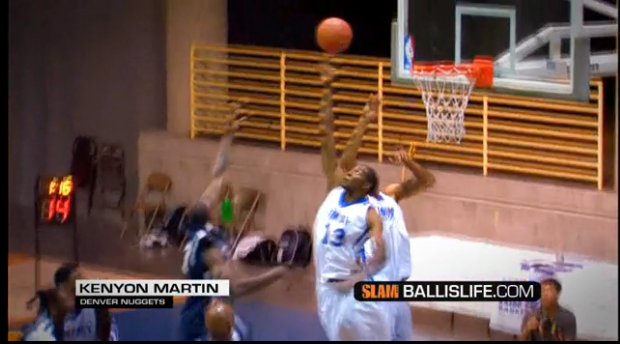 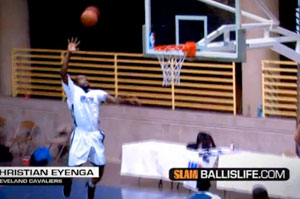 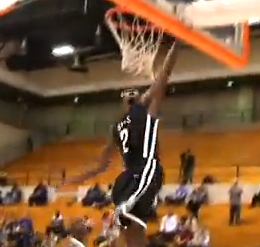 Video: John Wall Shows Out at Clash of Superstars