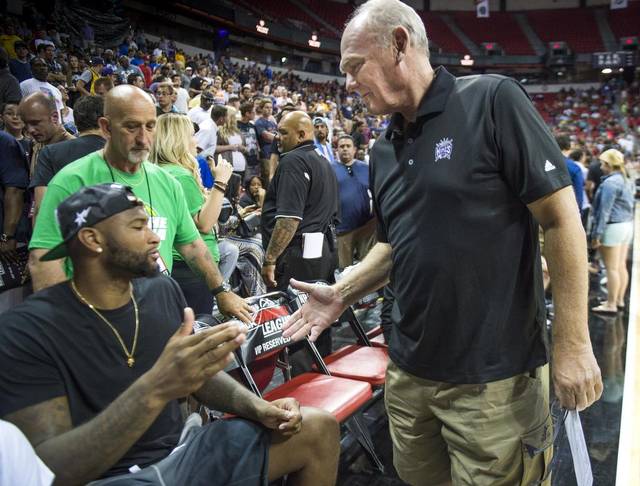 Following an uneasy summer of rumors and innuendo, a hard-fought truce seems to have been achieved between Sacramento Kings head coach George Karl and All-Star center DeMarcus Cousins.

George says he apologized to the big fella for his role in creating the drama.

Karl wants Boogie to learn to control his volatile emotions on the court.

“I’ve had some great players and I’ve never had one player that I have said is untradeable,” Karl told the Sacramento media. “You always got to be ready for the possibility of a great trade that could come your way.” […] Intended or not, the statement by Karl was a shot across the bow of Cousins and got the rumor mill churning. With two sentences, Karl put himself on the hot seat after just two months on the job and set the Kings PR team scrambling.

“To be honest with you, I apologized to DeMarcus for making the trade comment that I’ve never coached a player that’s untradeable,” Karl said. “That was wrong for me to say, because you all (the media) took it and blew it up into crazy.” […] “But it’s my responsibility to be smart enough to not say things like that,” Karl continued. “So I did apologize because I thought that was the only thing, maybe some other things, but really the only thing that got us separated was that comment that then everybody wrote the we’re going to trade [Cousins].”

“I think DeMarcus has to make a commitment just to not allow frustrations to cause a disruption in the game,” Karl said earlier this week. “I don’t like negative emotion in a game. I think it’s a sign of frustration, it’s a sign of we’re losing. If there is any emotion in a game, it should be positive.” […] “We gave away too many possessions that cheapen the game because of our emotional outbursts,” Karl added. “You can’t do that. You can’t ruin the game because you get emotionally frustrated.”