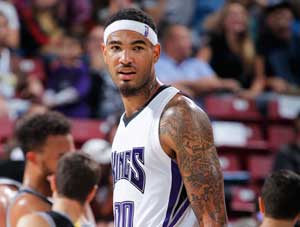 Sacramento Kings coach George Karl says he’s leaning toward placing Willie Cauley-Stein into the starting lineup this upcoming season. While he isn’t 100 percent certain that’s where he wants the No. 6 Draft pick out of Kentucky to go, the starting spot is definitely an option. More from CBSSports.com:

“I would say right now, Willie’s probably going to start,” Kings head coach George Karl told reporters on Saturday, via CSN Bay Area’s James Ham. “I’m not sure of that yet, but I think that’s probably where I’m heading.”

The rookie started four of Sacramento’s six exhibition games. Veteran Kosta Koufos started the other two. Due to Koufos’ history with Karl in Denver, it wouldn’t have surprised anybody if he had gotten the nod. If Cauley-Stein is ready, though, then why not give him the opportunity? He’s perhaps the best defensive prospect the NBA has seen in years, and the Kings’ frontcourt of the future might as well develop some chemistry.

The concern here is spacing. With a starting lineup of Rajon Rondo, Ben McLemore (or Marco Belinelli or James Anderson — Karl hasn’t said who will start at shooting guard yet), Rudy Gay, Cousins and Cauley Stein, opposing teams are going to try to force jumper after jumper. But that would have been an issue with Koufos in Cauley-Stein’s place, anyway.