Giannis Antetokounmpo to Start at Point Guard for the Bucks 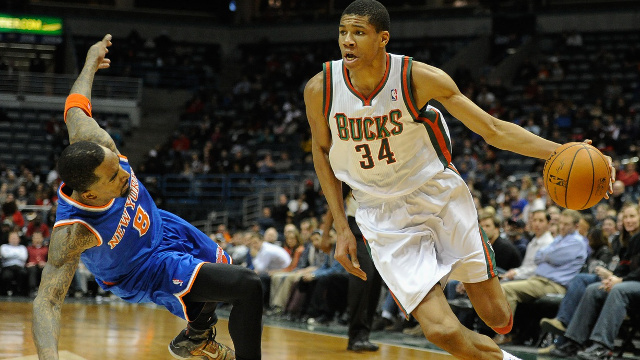 OK, so this is clearly no longer just some fun experiment.

Milwaukee Bucks head coach Jason Kidd informed the local press Monday that he plans to have Giannis Antetokounmpo start as his point guard Tuesday night against the Cleveland Cavaliers.

Antetokounmpo and his freakishly-long limbs ran the Bucks’ offense in the fourth quarter of Saturday’s 91-85 preseason loss to the Chicago Bulls.

Kidd said he will go with a big starting lineup including Antetokounmpo, Khris Middleton, Jabari Parker, Ersan Ilyasova and Zaza Pachulia when the Bucks face the Cavaliers. […] Point guard Brandon Knight will not be on the trip due to a groin injury suffered Saturday, and center Larry Sanders also will stay home due to illness.

“I think his first gift is he likes to make plays for his teammates,” Kidd said of the Greek athlete. “That’s one of his strengths and we’ve got to find a way to put him in that position. In the open court, he’s special. In the half court, we need to find ways to make sure that he can help his teammates and also help himself.”

“I think a coach has to listen to his players,” Kidd said. “Without them even being verbal, they’ll tell you with their actions what they feel comfortable with. Some of the plays he made in the Chicago game, but also just in practice, he’s trying to find guys. He’s trying to do the right thing. You take away being almost 7 feet, he’s a special player.”